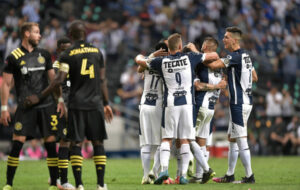 Estadio BBVA Bancomer — Another MLS team is out of the CONCACAF Champions League — and another one at the hands of a Mexican club. On Wednesday night, the Columbus Crew SC crashed out of the CCL after a 3-0 loss to Monterrey.

Currently, the only MLS team to advance to the semifinals is the Philadelphia Union, who will take on either Club América or the Portland Timbers. The two are tied on aggregate, but América boasts the away goal.

In Monterrey, Meza got the home side off to a hot start, scoring in the third minute. He followed that up with a goal in the 26th minute, coming off a shot inside the box. The goal did have some controversy around it, as a Rayados player took down defender Josh Williams and the referee elected to play on.

Monterrey put the final nail in the coffin in the second half, with Miguel Layún scoring off a free kick right outside of the box in the 71st minute.

Meanwhile, the Crew were limited to one shot on goal. Gyasi Zardes featured for the first 45 minutes before being subbed out and replaced by Bradley Wright-Phillips as a precaution. Zardes had hurt his shoulder in the first match against Rayados. Crew goalkeeper Eloy Room was a busy man in net, making seven saves against Monterrey’s relentless attackers.

As mentioned, Rayados will take on Cruz Azul in the CCL semifinals.

What’s next for the Crew?

Columbus will now focus on MLS play. The Crew are slated to take on D.C. United this Saturday at 1:30 p.m. ET. Then, the Crew have a quick turnaround against Toronto FC on Wednesday for a midweek contest at 7 p.m. ET.

Crew vs. Monterrey: The Goals

Monterrey gets a second at home. Maximiliano Meza scores a second and has a brace for @Rayados. #MTYvCLB | 2-0 | #SCCL pic.twitter.com/u1fqd619ge

Miguel Layun with a STUNNER against the Crew. @Rayados up by three.#MTYvCLB | 3-0 | #SCCL pic.twitter.com/AKIYiRvSer