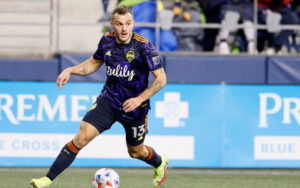 After a difficult year, will Jordan Morris fire Seattle Sounders back to MLS Cup glory?

By his own admission, it’s been a difficult year for the Seattle Sounders and USMNT forward Jordan Morris.

He earned a move over to the EFL on loan to Swansea City back in January, but this dream was tragically cut short when he suffered an ACL injury back in February. Morris was still trying to force his way into the Swansea City team and it was incredibly unfortunate timing when he suffered one of the longest lay-offs of his career.

“It’s been a long year for myself personally”

Morris admitted as much when he was on media duties this week after his called up to the USMNT.

“It’s been a long year for myself, personally. Lots of games watched on the TV and watching from the sidelines,” Morris said. “It was disappointing and frustrating.”

Disappointing and frustrating were no doubt key phrases used by his team in MLS as the Sounders lost on penalties to Real Salt Lake in the first round of the playoffs for the MLS Cup. The Sounders bombarded the RSL goal with 21 shots to their 0, but had just three on target. The Sounders also had 62% possession — but remarkably still lost the game, leaving the Rave Greens fallen at the first hurdle.

Many Sounders fans will no doubt have wondered if they could have finished top of the Western Conference with a few more positive results towards the back end of the season — where the team went six games without a win — and although Morris did play a part in those games, he was not up to full match sharpness.

Having lost out on top spot on the final day of the regular season, perhaps a fully fit Morris would have seen the Sounders finish top with games to spare in 2021.

All of 2021 has been building to this for @JmoSmooth13

Could a fully fit Morris be the difference for Seattle in 2022?

When Morris spoke to the media, he alluded to the long journey back to full fitness.

“Part of my goals this year was trying to get back on the field before the season ended and get back into a national team camp before next year,” he said. “Throughout all my recovery and everything I would go back to those and say this was my goal.”

The Sounders no doubt need to make some additions in the transfer window to build on a recent season next year. Morris, however, could be like a new signing if he hits form in the off season for USMNT and gets a full pre-season conditioning under his belt before the 2022 campaign gets underway. Also, 2022 is a World Cup year, and that will play strongly on his mind and no doubt give him even extra incentive to cement his place in both the Sounders and the national team after a year to forget.

The post MLS: Will 2022 see Jordan Morris get back to his best? appeared first on Last Word On Soccer.