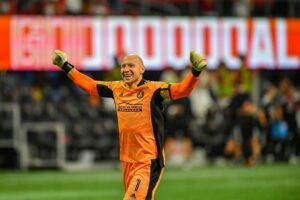 EDITORIAL – Eight games were played across North America in Major League Soccer. The MLS playoff race is getting hotter across both conferences with all 14 spots still up for grabs. Saturday’s matches brought plenty of excitement to shake up the 2021 standings. Here is a rundown of what you need to know from the Sep. 18 MLS games.

The Five Stripes continue its remarkable run with a 3-2 win at Mercedes-Benz Stadium over D.C. United. The Atlanta frontline was once again fantastic with Ezequiel Barco scoring a thunderous free kick in the 18th minute and Josef Martinez adding the second goal on a nifty finish in the 64th minute. The deal was sealed by the home side in the 87th minute with George Bello’s first goal of the 2021 season.

The seventh win in eight matches for the Five Stripes certainly makes them the hottest in MLS. The tumultuous first half of 2021 for them is ancient history as Atlanta moves on to Philadelphia next week. DCU will have to shake off its 11th loss quickly with a midweek home match against Minnesota United upcoming.

It was a wild affair in Foxborough with the Supporters Shield leading New England Revolution being held to a 1-1 draw with the Columbus Crew. After a scoreless first 45, the Black & Gold took advantage of a counter-attack with a Gyasi Zardes header powering past Matt Turner in the 58th minute for the lead. The Revs responded immediately with an equalizer four minutes later as Adam Buksa received a gift from Columbus center back Jonathan Mensah.

Despite 33 shots for the home side, the Revs couldn’t get the finishing blow against the defending MLS Cup champions. The journey towards the Shield resumes for New England on Thursday against the Chicago Fire. The Columbus Crew will happily take this point back home on Saturday against CF Montreal in a must-win for both clubs.

Orange & Blue fans at TQL Stadium left disappointed as New York City FC grabbed three road points at FC Cincinnati. Brenner’s 4th-minute goal for FCC gave the home side something to cheer for. That quickly turned around as NYCFC got the equalizer in the 37th minute from Keaton Parks. In the second half, Cincy was called for a controversial foul in the box and NYC got a 60th-minute penalty scored by Valentin Castellanos for the winner.

The match ended in drama with both teams going after each other, resulting in two red cards for Cincinnati. Alvaro Barreal and Isaac Atanga will be suspended for FCC’s next match against DCU over the weekend. New York City now prepares for “Hudson River Derby Week” with two matches with the New York Red Bulls next week.

For the first time in over two years, Toronto FC was able to celebrate a win at home in Canada in front of its fans. The last-place TFC grabbed just its fourth victory of a disappointing season with a 2-1 score line over Nashville SC. The winning moment came in the 79th minute as veteran defender Omar Gonzalez ran to the back post on a set-piece play and slotted home the game-winning goal. The three points are the first for Toronto since July 24 and snap a nine-match winless run.

Next for TFC will be a match in the Canadian Championship against York United on Wednesday in the quarterfinals. After that, to Colorado to play the Rapids back in MLS. Nashville SC loses a bit of ground in the top half of the Eastern Conference with its loss and NYCFC’s win. Nashville will look to recover on Wednesday in Fort Lauderdale against Inter Miami.

Straight off the training ground. A thing of beauty!@Omar4Gonzalez | #TFCLive pic.twitter.com/FVtfqI9Zfs

The best game of the night and possibly the season took place in Austin. El Tree fell to the San Jose Earthquakes 4-3 in a thrilling contest at Q2 Stadium over in the Western Conference. Austin led 3-1 at the halftime whistle with an exquisite offense but the defense collapsed in the second 45. The Quakes scored three unanswered in the first 18 minutes of the second half with the eventual winner coming from Javier Lopez in the 63rd minute.

San Jose’s comeback has them right in the thick of the playoff hunt out West. They will continue that hunt next weekend with a six-pointer against Los Angeles FC at Avaya Stadium. Austin will try to snap a five-game losing streak on Sunday when they welcome LA Galaxy.

Despite less than 40 percent of possession, the Loons executed when they had the ball to shut out the Galaxy 3-0 at Allianz Field. It was an impressive performance from Argentine striker Emmanuel Reynoso who scored an early first-half brace to continue his strong 2021 campaign. Reynoso now has 7 goal contributions this season with his two goals keeping the Loons in playoff positioning.

Minnesota is within striking distance of the top-four with teams chasing down their necks behind them. Next for the Loons is another home match against the Houston Dynamo. LA Galaxy takes a six-match unbeaten run to Austin looking for its first victory since Aug. 14.

This Copa Tejas match in the Space City concluded with five goals. The Houston Dynamo soared to a 3-2 victory over its longtime Texas rivals FC Dallas thanks to a fast start. Tab Ramos’ side scored quickly with a 5th-minute strike from Griffin Dorsey getting things started for Houston. Before you knew it, it was 2-0 in the 20th minute after a goal from Fabrice Picault. Carlos Quintero’s second-half penalty was enough to hold off Dallas’ late charge at a comeback.

The Dynamo’s bounce-back continues with a three-match unbeaten run following a seven-match winless streak. Houston will try to maintain that momentum and keep its playoff hopes alive at Minnesota on Saturday. FC Dallas will travel North to Vancouver for a meeting with the Whitecaps in a bottom-of-the-table six-pointer.

It was a massive upset at Rio Tinto Stadium as Real Salt Lake handed the Seattle Sounders its fifth loss of 2021. The winning moment came in the 48th minute as Damir Kreilach headed the ball off an Aaron Herrera cross off the pitch and into the net. The goal ignited the RSL faithful towards the club’s first win over Seattle in two years.

Salt Lake had the edge offensively throughout the match with 16 shots and a 1.69 xG compared to the Sounders 0.42 xG and 9 shots. RSL’s next task is up at Providence Park against the Portland Timbers while Seattle plays for a trophy on Wednesday in the Leagues Cup final against Club Leon. The final will be played in Las Vegas at Allegiant Stadium.

they understood the assignment