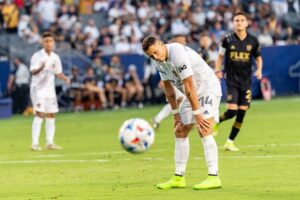 EDITORIAL – The first MLS match week of October concluded with a busy seven-game Sunday. Plenty of goals were scored as multiple playoff contenders got dominant wins. Others on the outside looking in got their playoff hopes dimmed with losses. The MLS season has just one month left and this Sunday was the last full day of league action for two weeks.

Here is your Sunday MLS rundown.

The MLS action started early on Sunday with a noon kick-off in the Bronx. It wasn’t the most entertaining way to commence the slate of games as New York City FC and Nashville SC played to a scoreless draw at Yankee Stadium. NYC won the stat battle with more possession (59 percent), more shots (12), and higher expected goals (2.51 xG) but couldn’t get past Joe Willis who made three saves in net for Nashville. The draw in this match clinches the number one seed in the East for the New England Revolution.

Nashville has now drawn half of its games this season and maintains the least amount of losses in MLS with just three. The East’s second-place team will get the next two weeks off before a game with third place D.C. United at Audi Field. Despite no goals, New York City did snap a two-game losing streak before its next match at the New York Red Bulls in the last Hudson River Derby of 2021.

The Union extended its unbeaten run to four games with a dominant 3-0 victory over the Columbus Crew. The recent Campeones Cup winners looked sluggish throughout as the Union jumped to the lead off a 30-yard free-kick by Jack Elliott. Philly added a second just 30 seconds into the second half with an Alejandro Bedoya tap-in. Despite playing with 10 men for the last 25 minutes, the Union didn’t allow the Crew an easy goal and got a third at the end of the match.

Philadelphia is narrowly in third place and will be among the few MLS teams to play next weekend. They travel to TQL Stadium to play FC Cincinnati. The Black & Gold’s playoff hopes hang by a thread now after this defeat. Columbus hosts Inter Miami in a must-win game on Oct. 16.

Kansas City is keeping the race for best in the West interesting with an emphatic 4-2 victory over the Houston Dynamo at Children’s Mercy Park. SKC controlled the game throughout with three players having at least two-goal contributions. Johnny Russell had a brace, Israeli midfielder Gadi Kinda scored and got an assist while Daniel Salloi provided an assist and scored his 16th goal of the MLS season.

Sporting has won four of its last five with a chance to take the Sounders to the wire for the top-seed in the Western Conference. Next is a trip to Vancouver to play the Whitecaps in two weeks. The Dynamo will play in two weeks as well but they get a shot at the Sounders in Houston.

This goal is Kinda pretty

TFC’s end-of-season charge continues with a 3-1 triumph over the Chicago Fire at BMO Field. The man of the match was Yeferson Solteldo who recovered after missing a first-half penalty by assisting Omar Gonzalez’s 56th-minute goal and adding one of his own in the 70th minute. Toronto has now won three of its last four MLS matches with an extension to this streak certainly keeping them wooden spoonless in 2021.

Toronto is still in 26th place in the overall MLS standings but this win over Chicago has them five points clear of last-place Cincinnati. Toronto continues at home against Atlanta United while the Fire tries to keep its season alive at New England in two weeks’ time.

The lone interconference day of the day was a victory for the Western Conference. The Portland Timbers got a late winner from Jaroslaw Niezgoda to get the three points at Providence Park against Inter Miami. The header from the corner kick sailed past Nick Marsman to send the Portland fans into a frenzy. The Timbers might be the hottest team in MLS with seven wins in its last eight matches, including four consecutive.

This streak has separated Portland from the pack and keeps them firmly in the top four with a seven-point cushion over Real Salt Lake. Its next game is in Los Angeles when they take on the Galaxy. Despite the loss, Miami is still seven points outside the playoff spots with a game in hand on seventh-place Atlanta United. Miami plays next weekend at the New York Red Bulls.

El Trafico highlighted this MLS Sunday and for the second time this season, no winner was declared. The game seemed poised to be another Galaxy-LAFC classic when LAFC took the lead in the 11th minute. Mamadou Fall stayed in the air for a powerful header from an Eduard Atuesta corner for the opening goal. Eight minutes later, the Galaxy equalized with a breakaway goal from Frenchman Samuel Grandsir. This is how the match concluded.

Despite snapping a three-game losing skid, the Galaxy is winless in its last nine matches and is clinging for dear life in the top seven. The Galaxy’s next test is a home match against the hottest team in MLS, the Portland Timbers. Likewise, Los Angeles FC also snapped a three-game losing streak with this draw and will host the San Jose Earthquakes on Oct. 16.

Galaxy vs. LAFC is off to a

The Sounders are just too good. Seattle ended Sunday’s action late with a cruise-control win over the Colorado Rapids 3-0 at Lumen Field. It was as fast a start as you can get with Cristian Roldan slotting home the first goal in just the 2nd minute. Two more were added in the first half by Jimmy Medranda and Joao Paulo to earn Seattle its third straight win.

Seattle continues to control its own destiny with a two-point advantage over SKC at the top of the West with a game in hand. The Sounders will look to extend its winning streak to four next weekend against the Whitecaps. The Rapids will also play next weekend and have a chance to rebound against Minnesota United at Allianz Field.