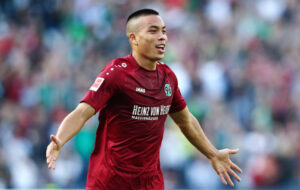 Both players got their start under former USMNT manager Jurgen Klinsmann in 2013. Morales has made 16 appearances for the men’s national team while Wood has 45 appearances. Wood has not been on a U.S. roster since 2018, as he’s struggled in club and bounced around Germany in the last couple of years.

Morales joins New York City FC from Fortuna Dusseldorf of the Bundesliga. Morales signed with Dusseldorf in 2018 and helped the team earn a promotion to the Bundesliga. His entire senior career has been in Germany, starting with Hertha Berlin in 2008.

Morales said he’s excited, as an American, to live in the U.S. and play in MLS.

“I’m really grateful to be here and it’s a big step for me as a player,” Morales said. “It was always my dream to come to MLS as an American, to live here, and do what I love. NYCFC is a great Club. You have everything you need as a player to develop and improve. I’m really excited to get out on the pitch, to work hard and win games. I hope I can see a lot of the fans in the future at the stadium.”

A windy win to finish up the week

Wood, like Morales, has also spent his entire senior career in Germany.

The native Hawaiian began his career with Gregg Berhalter’s former club 1860 Munich in 2010. He made the jump to the Bundesliga in 2016 when he joined Hamburger SV. Wood also featured for Hannover on loan in the 2018-19 Bundesliga season.

“It was really important for me to get into a club that felt like a family and that’s why it feels so good to come into Real Salt Lake,” Wood said. “In talking with the coaches, that was the vibe I got and made it an easy decision. I’m excited for this new chapter and challenge and I want to make it as successful as possible.”

The rumors of Wood coming to Real Salt Lake began a couple months ago. However, according to Lucas Muller of RSL Soapbox, Wood wanted to remain in Germany until his wife gave birth to their child. Wood isn’t expected to join Real Salt Lake until July 1.

During his time with the USMNT, Wood scored 13 goals in 45 matches. If he is able to find the back of the net on a consistent basis for Real Salt Lake, it could warrant a look — or call up — from current USMNT manager Berhalter.

“We are excited to have Bobby come in to give us a great option of his quality in our attack,” Freddy Juarez, RSL coach, said. “He brings many years of European experience and experience with our national team and we are looking forward to having him here to compete and make everyone better.”

“I think the work ethic will fit the club very well.”