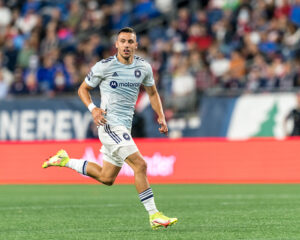 PREVIEW – A MLS season preview between the Chicago Fire FC and Minnesota United FC will take place on January 29 at 1:00 p.m. ET. With just under a month to go until the 2022 MLS season kicks off, teams are making their way south for a few warm-weather friendlies. Among them are a rebuilding Chicago Fire, who face league rivals Minnesota United in Orlando tomorrow. Let’s take a look at what to expect from this exciting preseason fixture.

Chicago and Minnesota Square Off in Florida

The good news for the Fire ahead of this clash is that new striker Kacper Przybylko will likely make his debut. The Polish target man joined the team’s camp in Orlando after a blockbuster transfer from the Philadelphia Union and will look to bag his first goal(s) for the Fire this Saturday. This is what Pryzbylko said about the move according to Tom Bogart of MLS Soccer:

18-year-old Jhon Durán is also set to put on the Fire shirt for the first time. The talented Colombian signed a pre-contract over a year ago. However, MLS rules prohibited him from joining the team before he turns 18. Now that he’s with the squad, the pacy forward has plenty to prove, and he’ll probably get an opportunity tomorrow.

Attacking problems from last year will further be resolved by a well-rested and fully-fit Stanislav Ivanov. Still just 22 years of age, the Bulgarian winger was plagued by injuries for much of 2021. This included missing four months last year because of a knee injury. This knee injury required surgery according to Patrick McCarney of SB Nation. This game will be played at Omni Resort at ChampionsGate.