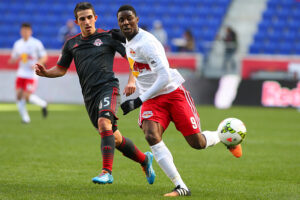 EDITORIAL – The United States has a new professional soccer league. America, say hello to MLS NEXT Pro, a new addition to the third tier of the American soccer pyramid. 20 reserve teams of MLS clubs and one independent team will take to the pitch as soon as March 2022. Eight more will get in on the action in 2023. Announced just ten days ago, MLS’ venture into lower-tier soccer poses an interesting question – how many Division 3 leagues is too many?

How does MLS NEXT Pro fit into the US soccer landscape?

Established by @MLS, MLS NEXT Pro is a new professional league for the next generation of soccer stars in North America.

It’s been 25 years since Major League Soccer became the nation’s premier soccer league. Now, after years of success at the top level, MLS has decided it wants to try its luck (again) at organizing a developmental league. Per a league statement, NEXT Pro will “accelerate the future of soccer in North America” and “complete the professional pathway”. The idea seems great on paper – create a direct link between Division 3 and MLS with a new league. There’s just one problem. We already have two D3 leagues.

Both of the current leagues, USL League One and NISA, began to play in 2019. At the time, it seemed crazy that the US Soccer Federation would give equal sanctioning to two new competitions. After the infamous NASL fallout, the last thing the country needed was multiple D3 leagues. Yet they’ve made it work. Two years later, both are rapidly expanding and bringing pro soccer to a wider selection of cities.

So, is there a place for MLS NEXT Pro? Factoring in expansion for 2022 and excluding the five clubs that are moving to the new league, Division 3 already has 24 teams. With 29 clubs set to join NEXT Pro by 2023, that number will rise to a whopping 53. It’s hard to imagine so many teams coexisting for more than a couple of years.

Possible impact to other leagues in USA

The journey has never been clearer: MLS NEXT

MLS@MLSNEXTPRO will kick off its inaugural season in March, just one month after MLS action starts, and see its season culminate in postseason action in September.

If MLS succeeds in establishing NEXT Pro as the way to the top for young talents, fewer and fewer players will head to NISA or League One clubs. A player competing for an MLS reserve team in NEXT Pro already has a contract with the parent club. No official transfer needs to be made for that player to move up to MLS. Even those that play for independent clubs in the new league will be seen regularly by MLS coaches and scouts at matches.

With no trace of MLS left in the other two D3 leagues, players competing there will be treated as second-class. Not even a top NISA or USL1 talent is worth the negotiations and payments that come with transfers, at least not when there are so many players available for free.

In short, only MLS rejects and mediocre players with no real potential will be left to sign contracts in NISA or League One. Soon, these two leagues will become unworthy of high ticket sales or lucrative sponsorship deals. Inevitably, this will lead to their collapse. Independent clubs in the two leagues will either join NEXT Pro or fold. And so, MLS will become the dominant force in Division 3, opening the door to a future Division 2 takeover. Within no time, the league will have seized control of the entire soccer pyramid.

The USL, as a company, is safe, at least for a little while. Because of its Championship, which will still play host to 27 teams despite the formation of NEXT Pro, that particular organization can live with their D3 league being shut down. NISA, on the other hand, only operates the one league; MLS taking control of D3 will deliver the fatal blow to its already-wobbling structure. And so, the only league with intentions of introducing promotion-relegation in the near future will be gone for good.

The USSF on why they should change approach to reserve leagues

.@MLSNEXTPro will offer young players and experienced professionals the opportunity to develop & showcase their talents while competing for an MLS NEXT Pro championship.

21 clubs will compete in MLS NEXT Pro’s inaugural season, kicking off in March 2022. pic.twitter.com/ER3vMdtexX

Whether you love or hate MLS, there’s no denying that its executives understand the ins and outs of pro sports in this country. MLS wants control, seeks control, and they’re well on their way to getting it.

An MLS pyramid would be more streamlined than the current structure, that’s for sure. But it would mean a total monopoly that goes against the very values of the sport. It would put professional soccer completely in the hands of one company. It would undermine efforts to promote independent pro sports in the US.

It’s on the USSF to change their approach towards reserve leagues. The MLS should be allowed to go forward with NEXT Pro, but it should be sanctioned as a youth league, similar to Premier League 2 in England. Independent clubs should be restricted to NISA and USL. This solution would leave aspiring professionals with a choice – try to make the jump from youth to pro via NEXT Pro, or join an independent club to gain experience.

By restricting MLS to Division 1, the USSF will leave the future of soccer in this country unscripted, the way it should be. The door will remain open to innovations and positive changes to the professional game.

For the love of soccer, the USSF should retract MLS NEXT Pro’s Division 3 sanctioning.

The post MLS NEXT Pro Announced: What Impact Will the New League Have? appeared first on Last Word On Soccer.