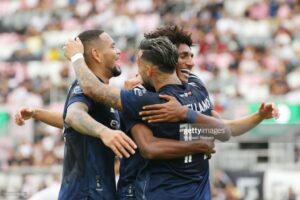 MLS Decision Day was as wild as predicted. The only certainty coming into Sunday, was first place, held by the best team. in the league this season, New England Revolution. With plenty of playoff positioning, and playoff spots up for grabs, every match meant something, to someone. As the dust settles on the MLS Eastern Conference, let’s take a look at how the MLS Playoffs have shaken out.

Last few East spots in the Audi #MLSCupPlayoffs are set.

Okay, so this was the only irrelevant match. The Revs have already locked up not just the top spot in the East, but the Supporter’s Shield as well. Inter Miami, even with their win on the road, had no shot of seeing the postseason, so this was all about ending the season on a high note, and they were able to do just that, in a tough match against the league’s best. The Revs will now get to enjoy the bye that comes with finishing atop the conference.

This match ended in a 1-1 draw. The result was a perfect compromise for the two sides after the day’s action. The Philadelphia Union did enough to cement their spot in 2nd, while the point was just what NYCFC needed to earn a match at home in the postseason.

Nashville was another team that had already locked up a playoff spot, but was vying for the best seed possible. However, on the other side, the Red Bulls had it all to play for, with their postseason lives on the line. It took them all of 30 seconds to get the first goal of the match, but Nashville were able to get the equalizer to split the points. The point was all Red Bulls needed to sneak into the postseason at the seventh spot.

What it all means

The Revs will get to enjoy the first round bye, getting some rest, and basking in the incredible season they’ve had so far. The Union will get to host a match against the Red Bulls, who were able to snag the final playoff spot with a draw against Nashville. The aforementioned golds will also get to host a playoff match, against a feisty Orlando City SC. NYCFC will have their hands full, as they will take on an Atlanta United side that has had a rollercoaster season, but will be looking to make a postseason push for the Cup.

The drama of Decision Day may have ended, but the chaos is just getting started for the Eastern Conference. Playoffs are set to begin November 20th, with times set to be announced.