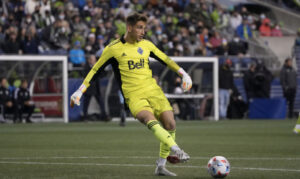 MLS 2021 was the definition of a “tale with two halves” for the Vancouver Whitecaps. Sluggish out of the gate, their poor form and humiliating 4-3 defeat to CPL side Pacific FC was enough to drop the axe on Marc Dos Santos.

In stepped Vanni Sartini. Exciting. Charismatic. Innovative. Italian. “The King of Commercial Drive” rectified a Whitecaps team that was a shell of its former self, worn out by nearly a full season of playing away from home. With the addition of designated player Ryan Gauld, Sartini adapted a 3-4-1-2 which saw the Whitecaps lose just two of it’s final 14 regular season games.

The aim for 2021 was always to make the playoffs, which they achieved thanks to a decision day draw at home against Seattle. However no one expected them to have the catastrophic fall, and inevitably the meteoric rise in the Western Conference. A 3-1 opening round defeat to Sporting Kansas City was the end to a rather positive 2021.

With a foundation for success in place, Sartini was given the reins as it was announced during the offseason that he would take over as the team’s permanent head coach. It was an offseason that was rather uneventful — despite the signing of Tristian Blackmon from LAFC. At least, it was uneventful until training camp kicked off.

Missing the opening two days of training camp for “personal reasons,” nobody batted an eye when 2021 team MVP Max Crepeau was absent. However as news quickly came swirling in that he was forcing a move, to rocked the organization. No more than 24 hours after the first tremblings, Max Crepeau was sent to LAFC. Thomas Hasal was now the Whitecaps no. 1 goalkeeper.

*Janio Bikel is on loan to Vicenza for the 2022 season

Following Crepeau’s sale, young Canadian Hasal steps into the spotlight. Becoming a fan favorite during the MLS is Back Tournament in 2020, Hasal became the immediate go-to guy if Crepeau was away for international duty, or injured. At just 22, Hasal is an excellent shot stopper, but it will be the communication, leadership and experience where the drop off will likely occur. Following Andy Rose’s retirement, the club shipped for Tristan Blackmon, who is in the midst of a heavy centerback position battle.

In the midfield, Sartini’s system unfortunately had no home for Janio Bikel, who was loaned out to Serve B side Vicenza for the year. Sebastian Berhalter was brought in for a small fee to provide some extra depth. Up front, it was Theo Bair who left for greener pastures on a permanent deal to St. Johnstone of Scotland. First round SuperDraft pick Simon Becher is another young name to watch this year.

#VWFC Sporting Director Axel Schuster saying Janio Bikel will likely be on his way overseas within the next day or two pic.twitter.com/reJEdB3JQF

For starters, it would be rather unlikely to see a change at the helm this season. It was playoffs or bust for Marc Dos Santos in 2021, and last place in the conference and out of the Canadian Championship was not justifiable. A change in formation also seems to be on the cards, with a more attacking twist on last years set up. Through four preseason games, Sartini opted for a 3-1-4-2, which features a more possessive and attacking set up compared to 2021. Barring injuries, 2022 should also be a full season with both designated players featured. Lucas Cavallini seems to be in great shape and midseason form, and Ryan Gauld.

MLS 2022 could prove to be a breakout year for a number of young players on the Whitecaps. Michael Baldisimo will be vying with Caio Alexandre for the holding mid position, thanks to his long range passing ability and energetic defensive habits. Cristian Gutiérrez and Javain Brown at the outside midfielder/wing back roles are on the cusp of really announcing themselves to the league.

David Egbo, who spent last year on loan with Phoenix Rising, has impressed Sartini in his first full MLS training camp. Simon Becher looks to follow in Egbo’s steps coming out of the Superdraft. Hasal is the team’s first choice keeper. There is plenty of young talent to look forward to in 2022 as well as years to come as they develop.

Depending on the situation of a given game, Sartini’s 3-1-4-2 has the flexibility to fold into a 5-3-2, a 4-3-3, or a 3-4-3 at a drop of a hat. That simply wouldn’t be possible if it weren’t for the depth and the versatility of this Whitecaps roster. Starting up front, Lucas Cavallini and Brian White. Need I say more?

A handful of youngsters backing them up in Egbo and Becher, with the possible resigning of Tossaint Ricketts as well to add to the forward group. Christian Dajome, Deiber Caicedo, Ryan Gauld and Ryan Raposo all have the option as well to play some form of striker/false nine.

In the centre of the park, talent is boasting. Caio Alexandre, Ryan Gaud, Leonard Owusu, Russel Teibert, Pedro Vite, Michael Baldisimo and Sebastian Berhalter. The list goes on and on. Giovanni Aguilar and Luis Felipe Fernandez-Salvador (both 2022 SuperDraft picks) both impressed the team’s coaching staff as well during preseason. Getting to the outside midfielders, Dajome is a guaranteed day one starter. But on which side? And with who on the other flank? That is still very much up in the air.

If Dajome is on the right, Gutierrez, Teibert and Marcus Godhino could all very well fill in the left channel. If Dajome is switched to the the left, Deiber Caicedo, Javain Brown, Jake Nerwinski and Ryan Raposo could occupy the right side.

The defensive line is another guessing game at this point. Apart from Thomas Hasal in goal, it is difficult to call exactly what the back three would look like. Last season’s additions of Florian Jungwirth and Javain Brown both found themselves a frequent starters in 2021. However, between Blackmon, Erik Godoy fully recovered, Ranko Veselinovic and the club veteran Jake Nerwinski, it’s a very intense competition for a starting spot.

Is losing Max Crepeau the end of the world?

Despite a 24-hour window where it felt as though everything that the club has worked for had been washed away, it is not the end of the world. Yes, there were moments of pure magic from Crepeau in his stretch with the club, winning club MVP in 2019 and 2021, but Hasal is no player to turn your nose up to.

Having joined the Whitecaps academy back in 2013, and breaking onto the scene in 2020, Hasal is more than familiar with the club’s ambitions and tactics. Allowing 28 goals in 17 appearances, and averaging an allowed goal every 58 minutes, Hasal ‘s development under Youssef Daha has been steady. Both Daha and Sartini have voiced their upmost confidence in Hasal, who feels ready for the challenge himself.

“This may be a possibility, prepare yourself”

That’s what #VWFC coaches Youssef Daha and Vanni Sartini told Thomas Hasal as rumours started to emerge that Crepeau would be traded pic.twitter.com/xnAdY71I9U

Last Word: How will the Whitecaps fare in 2022

Following the team’s emotional 1-1 draw vs Seattle to clinch a playoff spot, Vanni Sartini confidently stated that they would beat Kansas City in the first round of the playoffs. One 3-1 defeat later, and Sartini mentioned that at minimum he is hoping for a second round appearance in 2022, to build on what he achieved. The Whitecaps can without question make it to the second round, but actually putting that result together is a different topic.

It may take some time to figure out the ideal back line, let Hasal adjust into the starting role, and provide ample service to a clinical attacking duo. But if everything falls Vancouver’s way (some luck which is due considering their past couple of seasons), this team at a minimum should make the playoffs. Once they make the dance, anything can happen.