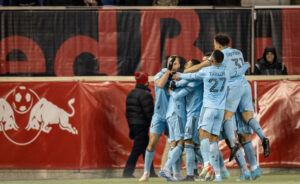 Minnesota United came into Harrison, New Jersey and defeated the Red Bulls 1-0 for their first win of the season. Against the run of play, Luis Amarilla volleyed the lone goal of the match. Patryk Klimala had his penalty saved by Dayne St. Clair who was excellent in his man of the match display.

One change for the Red Bulls from the 4-1 rout at Toronto FC last weekend. Tom Edwards gets his first start of the year, Tom Barlow drops to the bench. Lewis Morgan and Omir Fernandez are on the wings with Patryk Klimala spearheading the attack. The big news is new signing Luquinhas is on the bench, but Cristian Cásseres Jr is not in the eighteen.

Minnesota United make numerous tweaks to the team that drew 1-1 against Nashville SC. Dayne St. Clair starts in goal over Joe Willis who is not amongst the subs. There are just two natural defenders in the starting XI — Brent Kallman and Michael Boxall at center back. Robin Lod, Hassani Dotson, Luis Amarilla and Emanuel Reynoso will lead the threat in attack.

First Half: Klimala misses penalty in a frustrating Red Bulls half

First chance fell at the feet of Klimala whose effort rang off the foot of the near post. Seconds later and a shot by Morgan forced a great save by St. Clair.

New York would be awarded a penalty after handball in the box was checked by VAR. Up stepped Klimala but his low drive was saved.

Few chances happened up until the break. Dotson has played at right back for this first half. Minnesota has only mustered one shot in the first half, and have two players booked. So far, the tactical plan to frustrate the Red Bulls is going fine for Adrian Heath. Luquinhas and Caden Clark look to be options off the bench should the game stay scoreless.

Second Half: Luis Amarillo seals the victory for Minnesota United

The second half opened with a great chance for Fernandez to open the scoring. But his shot was stopped point blank by St. Clair. Minnesota opened the scoring against the run of play. After a corner went past everyone, the cross by Dotson was volleyed into the net by Amarillo. His first of the season.

One time 4 your mind, one time

Luis gives us the lead. pic.twitter.com/1V2C8Ff5VH

Caden Clark entered the game for Fernandez. Tom Barlow came in for Edwards. Hlongwane entered the match for Fragapane. The loons nearly doubled the lead off a fine counter attack but failed to convert. Luquinhas enters for his MLS debut, on for Dylan Nealis.

Dylan St. Clair was fantastic. The backup keeper won the game for the Loons with his wonderful shot-stopping. His penalty save changed the game and kept his side in it. Something for Adrian Heath to think about, maybe giving him another start next game.

Minnesota United smashed and grabbed their first win of the year. Against the run of play, the away side win their second straight game against the Red Bulls, and also gain three precious points on the road. While offering little in attack, they won’t care, they frustrated their opponents en route to victory.

Red Bulls now lick their wounds for next week. Numerous shots, chances and penalty shouts all went to nothing as Gerhard Struber’s men were shutout at home. Next week is another home game against the Columbus Crew.

The post Minnesota United stun the Red Bulls 1-0 for first win of season appeared first on Last Word On Soccer.