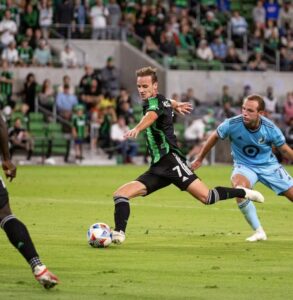 Austin, TX – After registering back-to-back victories at home for the first time this season, Austin FC were looking to stretch that run to three. Visitors Minnesota United were looking to cement their place in the post-season, coming into the match occupying the final play-off spot in the West, clear of LAFC by just one point. Minnesota stole the early advantage and despite creating enough chances to win the match, Austin came up short, The Loons running out 1-0 winners.

Minnesota United with a smash and grab win over Austin FC

Austin started on the front foot as has so often been the way at Q2 Stadium. Some lovely interplay between Sebastian Driussi, Diego Fagundez, and Cecilio Dominguez presented the latter with a chance just outside the box. Tyler Miller in the Minnesota goal needed to be alert to the effort and was. Minnesota promptly went up the other end and drew an equally good save out of Brad Stuver. And so began the pattern of the first half.

Austin came close again through Dominguez, then Fagundez, and also Tomas Pochettino, who arrowed a shot just wide of the post and later one narrowly over the bar from close range, a loss of footing at the vital moment affecting his aim. Driussi was pulling most of the offensive strings. The Argentinian had a couple of decent sights on goal, too, but nothing was quite ‘clicking’ for Verde. Every pass was a touch long, every run a tad late, every shot ever so slightly hooked, scuffed, too straight, or too strong.

At the other end, defense was having a rough night, too. Defense, not the defenders necessarily. The ATX marking in the box was questionable, but much of that could be attributed to players not tracking their runners. On several occasions, Minnesota forwards found themselves in acres of space, oftentimes more than one of them. On the 16th minute, it was Hassani Dotson combining with Franco Fragapane that led to The Loons opener. Brad Stuver displayed his usual heroics in the build-up, but when the ball fell to Fragapane at the back post for what was essentially a tap-in, there was little more the Verde keeper could do.

Minnesota carried their momentum into the second half, starting the better of the two teams after the break. Austin have historically struggled to find their footing early doors in the second 45, and it took them a good 10 minutes to do so again in this match. Fortunately for the home crowd, Minnesota didn’t extend their lead during that time. Once Austin finally wrestled back control of the game, how they weren’t able to register a goal is anyone’s guess?

Some poor refereeing certainly influenced the second half, but Austin’s final tally of 19 shots v Minnesota’s 12, 8 v 3 on target, tells the tale. Regardless of who the chance fell to, it was squandered. Just about every ATX forward and midfielder had a decent sight on net, or even a half-chance that on another day we have converted to an equalizer. Even the defenders were getting in on the action. Žan Kolmanič, perhaps startled to receive the ball in the box after Djitte flicked it back to him, proceeded to blast his effort over the bar with only the keeper to beat.

And late on, sub McKinze Gaines flew down the wing before dropping a perfect ball onto the head of the otherwise near-flawless Driussi. Maybe 6 or 7 yards out, with mere seconds and the game to go and a clear header on goal, the ATX DP nodded over. And that was Austin’s night in a nutshell. Head Coach Josh Wolff summed it up nicely in the post-match press conference. “For whatever reason, it wasn’t meant to be. I think we continue to show that we play good soccer, we create a lot of chances, and we didn’t give up a whole hell of a lot, either. That’s the cruel world of this game, and we’re on the wrong side of it tonight’.

Wolff prickled at the suggestion that Minnesota had the better of, well, just about anything but scoreline. When you look at the stats with Austin having the bulk of possession and nearly 3 to 1 chances on frame, or just go with the eye-ball test particularly in the early part of the first half and the latter part of the second half, you can certainly feel sympathy for the ATX coach. In the final analysis, though, Austin’s wayward finishing let them down more than anything else – and Minnesota United took full advantage. A cruel world, indeed.