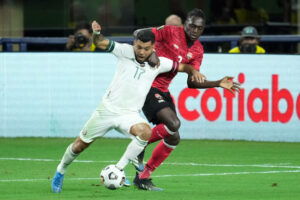 The 2021 Gold Cup kicked off amidst the madness of a Leo Messi Championship for Argentina, and a huge MMA fight. However, for those who chose Concacaf, the chaos was peak from the start. Trinidad & Tobago, most known for their upset win over USMNT in 2017, created magic once again. Withstanding an offensive onslaught, they were able to keep Mexico off the scoresheet, and escape with points shared, in a massive result in match one of their Gold Cup journey.

As far as action throughout the match, it was a fairly familiar cycle. Mexico gets possession, put together several great passes, find space, take a handful of shots, get stifled by Trinidad’s defense. In the 11th minute, Mexico faced their first obstacle, when forward, Hirving ‘Chucky’ Lozano, was on the wrong end of a collision. While no foul was given, Lozano was clearly pushed by a defender, causing him to fly face-first into the knee of the goalkeeper. He was carted off the pitch, and taken to the hospital, where the latest suggests he is conscious and being examined.

The national team have reported that he is stable, conscious and he will be medically examined

Without looking at the score, and just reading stats, you’d think Mexico won in a rout. Finishing the match with 83% possession, 695 passes, and a 15-1 corner advantage. However, the most shocking stat, 30 shots. Mexico peppered the goal 30 times, with only seven shots on target, and zero goals. Regardless of who was injured, to put on that much of an offensive performance, and to not only not win, but get shutout, is unacceptable.

For as much as you want to talk about how disappointing Mexico were, you can’t ignore the brilliance of Trinidad. It sounds crazy, but Mexico would have had even more shots if not for the play of the defense. There were plenty of runs stifled before a shot was even taken. The looks that El Tri did get, ended up being saved by goalkeeper, Marvin Phillip. Who, we should mention, is playing without being signed to a domestic club. The plan for Trinidad was to come in, sit back, defend, and limit opportunities. While they failed in limiting opportunities, they succeeded in everything else, earning them a well-deserved point.

The ugliness of the beautiful game once again reared its head during a Mexico match. As fans grew anxious, and upset over the result on the pitch, they began their abuse, off of it. The homophobic chant once again filled the stadium late in the match, causing the ref to put a pause to the action. Full disclosure, I am half Mexican, and the National Team was my first exposure to soccer as a child. I love this team. However, I find the actions of its fans absolutely disgusting, and frankly, embarrassing. Whether its racism, homophobia, or abuse of any kind, it has zero place in the sport. It’s time for FIFA to take proper action. As much as it would hurt personally, this team needs to face consequences for its continued disregard for decorum. Whether its match forfeits, point loss, or even being banned from competitions all-together, its time to crack down and get this out of our sport.

Mexico will undoubtedly bounce back. Not many teams will concede possession and sit back while Mexico take shooting practice. However, they will need to win their next two matches if they want to finish top of the group. Even with the injury to Lozano, and the draw last night, this team will likely see the knockout stages. The chaos of Concacaf is upon us, with Gold Cup glory up for grabs.