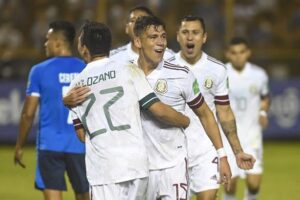 Goals from Hector Moreno and Raul Jimenez gave Mexico a 2-0 win away at El Salvador in a game that saw both teams down to 10 men. Mexico remain in first place, El Salvador are tied for sixth.

El Salvador ring in the changes from their 2-1 away defeat at Panama. A surprise, 25-year-old defender Mario Jocobo makes his full international debut, partners Eduardo Vigil as center backs. Isaac Portillo gets the nod over Christian Martinez in midfield. The fearsome attack of Joaquin Rivas and Enrico Duenas leads the line.

Mexico rest Raul Jimenez for this one. Funes Mori leads the line with Ernesto Vega and Hirving Lozano. Orbelin Pineda leads the midfield, while Hector Moreno and Nestor Araujo partner in defense. The always reliable Guillermo Ochoa is in goal.

Mexico had nearly taken the lead when Rodriguez pushed his free header wide from a corner. El Tri were also forced into an early change as Vega couldn’t continue. Jesus Corona replaced him.

Lozano earned the game’s first yellow card after a foul on Tamacas. But Mexico would take the lead. From a corner kick, Hector Moreno rose highest to head in the opening goal. Isaac Portillo entered the referees book with a yellow for a hard foul on Romo.

The first half whistle blew in what was a one-sided first 45 minutes. A disheartening half for El Salvador, just three shots overall and none of those on target. Tamacas was their biggest threat going forward, meaning neither Duenas or Rivas had enough service or time on the ball. Conversely, Mexico seemed to do whatever they wanted. Nine shots overall, four on target and all four were from inside the box. Their penetration and possession play stood out as they keys to their attacking play. Ochoa barely broke a sweat.

Gerardo Martino will clearly be the happier of the two managers, leaving Hugo Perez with work to do.

Second Half: Red cards, a penalty and a Mexico win

Inside the opening five minutes of the second half – Jacobo would be sent off. He brought down Funes Mori outside of the box and would head for an early shower. As a result, Ceren would be subbed off for Lizandro Claros.

La Selecta also changed to a 4-3-2 formation. But Mexico were still having their way, moving the ball side to side and getting shots off. Walmer Martinez entered the match for Joaquin Rivas.

Raul Jimenez entered the match for Funes Mori, Hector Herrera entered for Pineda. Soon thereafter, Araujo would be sent off for an elbow. Both squads were down to 10 men. Luis Rodriguez would enter the match for Lozano. Monterrosa, Tamacas and Portillo would be subbed off for Amando Moreno, Marcelo Diaz and Joshua Perez.

Mexico would earn a penalty in the 90th minute. Jimenez made a darting run in the box and would be brought down by Vigil. Jimenez stepped up and scored to put the result beyond any doubt.

The game lived up to the hype. The atmosphere was intense, both teams were down a man and it was as narrow as expected. El Salvador gave it their best shot but fell short. Mexico did just enough to leave with three precious points on the road.

El Salvador are quickly losing ground. The result leaves them tied for sixth, only two points above Honduras who are bottom. It’s their first home loss of this qualifying cycle and need to regain momentum in a hurry. They’re home to Jamaica and travel to Panama in the November window.

Mexico are the team to beat in CONCACAF. They win on the road, again. El Tri have already won twice on their travels, they lead the table by three points but it feels like more. They have the best squad and manager in the region. It’ll take some doing to stop this team from finishing top of the group.