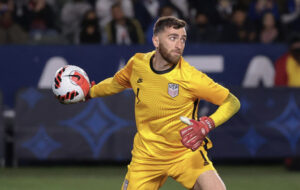 Matt Turner has had an amazing couple of years for both the New England Revolution and the USMNT. Now though, the goalkeeper is subject to interest from abroad. Out of the blue, Arsenal have put forward a ‘strong bid’ as reported by Taylor Twellman.

Matt Turner and his career so far

Turner was always regarded as a good goalkeeper in MLS but the past couple of years have seen his stock soar. He was an integral part of the Revolution’s record-breaking season. They may have come up short in the playoffs but of course, Bruce Arena’s men were exceptional in the regular season. Turner along with the likes of Henry Kessler and Andrew Farrell formed a great defensive unit that inspired New England on their way to a first ever Supporters’ Shield.

Arsenal have made a bid for USMNT and NE Revolution goalkeeper Matt Turner, reports @TaylorTwellman. pic.twitter.com/i6OJcKKtJN

Not only has he been excellent for his club side but the 27-year-old has finally made the jump up to the USMNT. Turner made his international debut in January 2021 against Trinidad and Tobago and he now has 13 caps to his name. The lack of playing time for Zack Steffen along with the form of Turner has seen him break into the starting XI for Gregg Berhalter. He started all six games in the Gold Cup as the US overcame Mexico yet again last summer and is a key part for the national team going forward now.

Has a move to Europe been a long time coming?

Turner has been linked with a move to Europe for a couple of years now as he has gone from strength-to-strength. That being said West Ham United and a number of teams in countries like Belgium and the Netherlands were originally touted.

Now though, as Twellman, the Revolution legend is reporting, Arsenal are very very keen. Aaron Ramsdale was brought in in the summer and he has hit the ground running, superseding Bernd Leno. The German is still at the club, so Turner’s place is a bone of contention.

Players swapping the MLS for some of the biggest leagues in Europe is becoming more and more common. Tajon Buchanan, a teammate of Turner in Boston, recently made the move to Club Brugge. Elsewhere, Daryl Dike signed for West Brom for nearly £10 million and Ricardo Pepi of FC Dallas broke the record fee of Bundesliga side Augsburg. Both of these along with James Sands and Cole Bassett and many more are players that Turner has played alongside. Soon, Turner could be joining them in Europe!

Click here to read more about the Revolution in this off-season.

The post Matt Turner- the Revs goalkeeper is subject to huge interest from Arsenal appeared first on Last Word On Soccer.