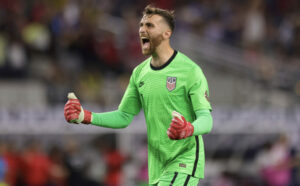 Analysis — Three saves, on paper, doesn’t seem like a lot. However, Matt Turner was busy against Qatar on Thursday night at Austin’s Q2 Stadium in Texas. The New England Revolution goalkeeper recorded three saves and helped the United States keep a clean sheet.

It wasn’t the prettiest victory for the United States, against a side unfamiliar to them. However, Turner anchored the backline with a veteran presence beyond his six appearances for the national team.

Turner, all of a sudden, is putting players like Ethan Horvath and Zack Steffen on watch. He could very well become the No. 1 goalkeeper for the United States of America.

Turner, after Thursday’s match, said it’s nice to have a quick pace of games.

“It’s nice when you have games coming thick and fast,” Turner said. “It feels really good. Any way I can contribute to the team, whether it’s making 10 saves or whether that’s making no saves and just making passes, I just want to help this team win. We’re getting results, we’re getting wins and we get to play in the final. So, that’s really special.”

Turner didn’t stop the penalty against Qatar, taken by Hasan Al Haydos. However, Turner and his teammate Kellyn Acosta stalled and provided a little bit of chaos to through the Qatari international off his game.

A look at the missed penalty kick.

Matt Turner: New to Concacaf, but a calming presence

Turner stated that a “lot of outside things” were going on before Al Haydos took the kick at the penalty spot. The penalty was initially given up by James Sands, as he was trying to poke the ball away.

Al Haydos attempted a paneka penalty, attempting to loft it up toward the crossbar and into goal. However, it strayed way over Turner’s head. It was an icing technique from Acosta and Turner that certainly had an effect on the play.

“I just tried to wait as long as possible. I know he chipped one down the middle earlier in the tournament, so I tried to wait, make him overthink his run up and overthink what he was going to do,” Turner said. “Obviously, I think people saw my reaction on the camera. I was real excited and that became a defining moment for our team, because from there on out we just built and built and built and the pressure mounted and mounted and eventually the dam broke.”

Turner’s excitement about summed up the United States goalkeeping pool reaction to the moment. While Turner didn’t exactly save the goal, he’s looked impressed throughout the entire Gold Cup. He’s making a legitimate case to USMNT coach Gregg Berhalter to grant him the number one spot over Steffen or Horvath.

The United States hasn’t necessarily found that No. 1 since the days of Tim Howard. Brad Guzan held on to the ropes, but he was wildly inconsistent with play. However, his veteran presence gave him another shot at the USMNT as he was included on this roster, along with Sean Johnson. However, there was no doubt to who was going to be between the sticks.

Guzan wasn’t going to beat out Turner for the starting spot.

As mentioned, Turner’s appearance on Thursday was only his sixth cap for the USMNT. He hasn’t been in the pool long. In fact, he made his international debut this year, back on Jan. 31, against Trinidad and Tobago in a friendly. In that match, he saved a penalty from Alvin Jones.

Stopping penalties isn’t anything new to Turner. Him and Tim Melia of Sporting Kansas City have essentially become the faces of MLS in stopping penalties. Turner is having himself a career season, as the 27-year-old has compiled a 73.1% save percentage. Currently, according to fBref, Turner is ranked as the top goalkeeper in MLS.

Last year, Turner was taking steps to potentially represent a different nation. In 2020, he received a Lithuanian passport, as his grandmother emigrated from the European nation to the U.S. during World War II.

If the United States kept passing up on Turner, he could have thought about switching gears.

Turner is going to start in the final on Sunday. Joke all you want about the Gold Cup and it’s tournament status as being a “top of the class” or “bottom of the class” tournament. However, a final is a final. Turner went from just making his debut a few months ago to starting in a final.

He’s given Gregg Berhalter a lot to think about before this fall’s World Cup qualifying. And, if anything, he’s given New England a bigger reason to love him. In fact, Turner is stealing the hearts of most USMNT fans with his play, clean sheets and big penalty saves.

Turner and the USMNT face off against rival Mexico in the Concacaf Gold Cup final at 8:30 p.m. tomorrow.

The post Matt Turner makes argument to be No. 1 USMNT goalkeeper in win over Qatar appeared first on Last Word On Soccer.