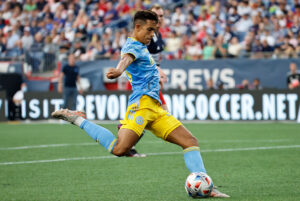 The Philadelphia Union draw Montreal in their Saturday evening match at home against CF Montréal – a team several rungs below them in MLS ranking- with the potential to take second place in the eastern conference with the expected win. In the end, their performance was fairly lackluster, and only just enough to garner a 1-1 draw.

Kicking off yet again this week beneath ominous clouds and hurricane advisories, the Union’s first match achievement was tying an all-time record for the fastest accumulation of yellow cards. The first yellow card went to Olivier Mbaizo in the 3rd minute, who ironically was back on the field last evening following suspension for yellow card accumulation.

Cool, Jamiro Monteiro with a yellow card in the 6th minute. So the Union’s right side is all on yellows …

The second yellow was awarded to Jamiro Monteiro in the sixth minute. Fans were quick to surmise the fault was the slippery mid-storm grass, or perhaps the coincidence in referee from this match and the yellow card accumulation record match they tied from 2017, both records officiated by the same man.

The Union’s first half was marked by fouls and failed attempts to inspire offensive momentum. Long crosses into the box didn’t convert, rare chances went wide or north of the net and their characteristic counter-press was strangely absent. Tension in the first half broke in the extra minutes before halftime with a Montreal goal. Djordje Mihailovic tapped one past Union goalkeeper Andre Blake – just named a late addition to the MLS All-Star Match – from a fast break and assist from teammate Joaquin Torres.

The Philadelphia Union have struggled this season to find their rhythm offensively, maintain their character on the press, and progress past their first trophy season which saw the subsequent Euro-transfers of two-star United States Men’s National Team players in Mark McKenzie and Brendan Aaronson.

With credit due to Montreal’s defending and a late first-half goal, the second half had fans worried we’d drop full three points to Montreal and fall in rankings rather than climb them. Despite multiple transitions of fresh legs onto the field, attempts at an offensive faltered into the final minutes. In the end, it would be youth from the bench to the rescue for a draw.

The Union’s 87-minute equalizing goal came on the foot of 17-year-old homegrown Quinn Sullivan, signed to the first team in November 2020. It was Philadelphia Union’s first shot on target of the entire match. Sullivan’s goal- his second of the season- is parr for the course in Philadelphia, a team that has long relied upon its youth and laudable player development system.

The Union’s performance as a whole was ‘just enough to walk away from an expected win with a draw. They didn’t concede full points to a lower-ranked team, but they didn’t garner them either. A performance of similar caliber won’t propel them far in a playoff run, or assuage their two-goal loss to Club America for September 15’s second leg of the Concacaf Champions League Semi-Final.

On the bright side, the Union had created a two-game unbeaten run. This is because the Union also defeated New York City FC on August 18. The Union will depart for Washington next Saturday where they’ll face rivals D.C. United in a match sure to test their ability to grow from last evening’s draw.