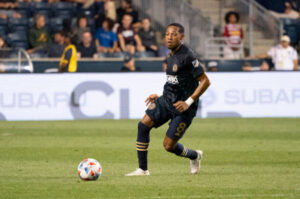 CHESTER, PA – The Philadelphia Union returned to Subaru Park last evening following a Concacaf Champions League semi-final loss in Mexico City to defeat NYCFC 1-0. The victory came on a second half goal from veteran captain Alejandro Bedoya, netting Philadelphia a needed three points for standings, morale, and their all-time record against their neighbors from just north. The Union are now on an eight game unbeaten streak at home in Chester, PA.

Despite a Thunderstorm Watch and a rainy first half, the Philadelphia Union rallied before a strong midweek crowd to overcome the team sitting just above them in the Eastern Conference table. The win chips away at the all-time record between the two teams, with Philadelphia amassing four wins, one draw, and nine losses in their 15 meetings since New York played their first match in 2015. The two are now tied with 31 season points apiece, sitting third and fourth in the Eastern Conference. NYCFC still edges above Philadelphia in the standings on goal differential.

A Tale of Two Defenses

NYCFC and the Philadelphia Union have more in common than season points and conference standings. They share tactical styles and positional strengths as well. As the two strongest defending teams in the eastern conference, both teams rely heavily on their ability to limit opportunity for the opponent. Both halves bore that out. Despite chances from both sides and an early scare to the post from Valentin Castellanos of NYCFC, each team only amassed one shot on target in the first forty-five. The second half saw much of the same, with even more chances for both sides, but only 2 total shots on target apiece by final whistle.

Working forward from their fortresses in front of goal, the teams played a scrappy battle of midfields and counter pressing for much of the match. Between the two defensive sides battling beneath a stormy sky, NYCFC’s defense proved scrappiest and the Philadelphia Union proved strongest. Throughout the match NYCFC accrued 16 fouls and two yellow cards, including one awarded to United States Men’s National Team player and Gold Cup victor James Sands. The Union received 11 foul calls and one yellow card. The Pigeons took far more shots, but all were blocked or saved by the Union defense or goalkeeper. As always, Jamaican goalkeeper Andre Blake was a stalwart in net for the Union.

Still Looking For That Striker

Possession, shot creation and accurate passes were in NYCFC’s favor. The Pigeons took 15 shots with 11 chances created. Philadelphia Union netted seven apiece for each. The balance of possession was even more drastic in the first half, but the Union pushed back for more of the ball in the second forty-five. The Union looked comfortable defending (as they tend to) despite the imbalance, and capitalized for the lone goal of the game when it mattered on the foot of their veteran.

The overarching story for the Philadelphia Union’s season remains their search for a striker, fumbling for that reliable goal scorer to round out their squad. Wednesday’s match against NYCFC didn’t resolve that question, but it did provide exciting possibilities, as well as the reminder of Alejandro Bedoya’s ability to capitalize in a tight spot.

Sergio Santos had a strong showing up front, Martinez and Flach looked lethal in transition, Monteiro provided fresh legs and momentum from the bench. The Union’s goal came at the 67 minute mark. Jamiro Monteiro, in for Gazdag at the 63rd (despite weeks off pitch with transfer rumors circulating), connected a ball to Kai Wagner who found Alejandro Bedoya for a header into the net.

The Philadelphia Union have a few questions left to figure out, but took home a hard fought three points in an important match relying on their strong defense and the reliability of their captain. Moving forward from NYCFC they’ll play Montreal at home this Saturday, then head to Audi Park to see about their rival D.C. United the following week. Both matches are well-winnable if the Union play the way they can. If the Philadelphia Union head into the fall looking this strong, keep collecting their points, and work on their offensive questions, fans can look forward to an exciting playoff run come November, and a mighty response to Club America for leg two of the CONCACAF Champions League Semi-Final September 15th.