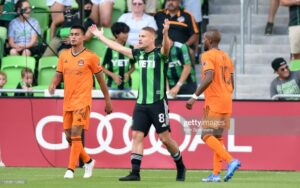 Austin, TX – Some athletes stumble into their profession. Some come to it late, or by some circuitous route. Alex Ring was only ever going to be a professional soccer player. He told his parents at the tender of 4, after having watched the 1994 FIFA Mens World Cup, coincidently hosted in the US, that when he grew up, he was going to play soccer. It should surprise no one who’s watched Ring play that he made good on that goal.

As Austin FC fans have come to appreciate this season, just as New York City FC fans had done for the previous 4 years, Ring is the model of drive and determination. His focus is borderline frightening, a trait commonly held by Finnish sportspeople, it seems. But there’s more to Ring than fearsome intensity. He cares deeply about the game and about his teammates.

This season hasn’t been all he’d hoped for on the field. But, unsurprisingly, Alex Ring is absolutely determined to lead Verde to glory before the veteran calls time on an already illustrious career.

LWOS: What’s your earliest memory of playing soccer? (Ring and I agreed to use the word football during the interview!)

Ring: I started playing after the ’94 World Cup, around 4 or 5 years old. They didn’t have a team at my age, so I was playing in a team two years older. I was very, very short until I had a growth spurt at 16, so it was very comical! I still have pictures and videos from that time. I remember, scoring a goal into the wrong end and celebrating it like it was at Wembley!

LWOS: After a great start to your professional career in Finland, at just 19 years old you made the decision to move to Germany. How was that experience?

Ring: I always knew what I wanted, the life I wanted, to be a professional footballer. I wanted to play in one of the top leagues in the world, which the Bundesliga is. I was never homesick whatsoever, and my wife joined me four months later when she finished her school. At 16, I went to a sports high school, I guess you can call it. I went there to eat breakfast, train with the school, and to train with the first team in Helsinki. My mom said, ‘Are you not going to stay in school?’, and I said, ‘No mom, I’m gonna see this out because I’m going to become a professional player’. So yeah, I always knew what I wanted and worked hard for it. I sacrificed a lot, but I’ve loved my life. It’s always what I wanted to do since I was a little boy and used to go to the stadium to watch teams play. So, living my life so I can’t complain.

LWOS: You’ve lived abroad the majority of your playing career so far. How valuable have those experiences been for you as both a person and a player?

Ring: I think it’s really cool to see how you evolve yourself, you know? The experiences I’ve had living abroad most of my professional career is something I don’t take for granted. It’s formed me as a person, as a man, all the different experiences, as a father as well. I don’t think a lot of people get to say the same. So, I’m very grateful.

LWOS: Players generally say that representing their nation is the pinnacle of their career. At various levels, you represented Finland over 70 times before retiring from the international scene many would say prematurely. How do you look back on that time now?

Ring: It was always an honor. Even though I didn’t grow up in Finland, my parents always made sure I knew where I came from. It was very important to them, especially to my mom. So, I was always very, very proud to represent Finland. I made the decision to retire for various reasons. When I moved to MLS, I started picking up injuries. And every time I would fly back and forth, you’d be jet-lagged for four or five days. Then I picked a pretty serious knee injury that I deal with to this day.

My wife was here alone with the kids, and my youngest was just born the year before, so I was missing out on a lot. Travel here in MLS is obviously not comparable to Europe where it’s two-hour flights everywhere. I just felt that I had to make a decision because the way it was going where I was half here, half there, it wasn’t working out for me. I wasn’t happy missing games here and I wasn’t happy missing games with the national team and then having to speak with the coaches. So, yeah the decision to retire from international football was very premature, but it was something I thought about for a very, very, very long time. I’m the type of person that when I make a decision, I do it because I truly believe in it. And it’s been fantastic! I get to spend a lot of time with my family which comes first, before everything else for me, even before football, which not a lot of things do.

I watched all the games at the Euros, though. I put the matches on at the facility (St. David’s Performance Center) before training if the game was on. It was awesome watching Finland, cheering them on. But I do not regret retiring. I understand people who don’t understand that, but I don’t need to explain that to them.

LWOS: You were given the captain’s armband at NYCFC. You’ve been made skipper here at Austin FC, too. What do you think are the characteristics that others see in you that make you a good leader?

Ring: I never see myself as a captain per se. Before I was handed the armband in New York, I wasn’t very vocal. This is where we get back to evolving as a player; I knew I had to step out of my comfort zone. I usually just showed it by the way I played on the pitch. In the locker room, I was more reserved. I guess that’s my Finnish side. But I’ve evolved a lot as a person. I played under Patrick Vierra, I’ve played under Domènec Torrent, and I learned stuff from Josh (Wolff). Vocally, you learn how to how to lead a team.

Sometimes you do something that wasn’t that good and then if you have the right people around you, they’ll channel you and you try to be better. I’m not perfect, but I always put the team first and if you give it your all…that’s what nice about being in a team, they’ll pick you up when you fall down. And when everything is going well, you get to share it with those same people. It’s like a family. That’s something I’m definitely gonna miss, the locker room, once I hang up my boots whenever that will be. So, you’d have to ask those coaches about what they see in me as a leader. I’d prefer other people to speak about that than myself. It doesn’t make me uncomfortable…well, maybe a little bit!

LWOS: You’ve had a distinguished career to date, playing in Europe, in the Champions League, on the international stage. Who would you rate as the most complete player you’ve ever played with, and faced?

Ring: The best I have played with……I’d probably go with (German international) Marco Reus. He was unfortunate with injuries but still had a fantastic career. That best I’ve played against? (Spain international) Andreas Iniesta. He was exceptional. I played against him, like, four times. It was horrendous every time!

LWOS: Finally, I know it’s been a challenging season with Austin FC. As team captain, what’s your message for the fans in regards to next season?

Ring: Obviously we aren’t happy with how this season has unfolded. We knew it would be a difficult season, but you have to say that everything here is in place with the city, our fans, and the bond we have as a team. I always say, when you work hard and you’re humble and you support each other, good things happen and I just don’t see how we won’t get there.

I don’t I don’t regret coming here for one second. It’s been amazing to see this all unfold. Just to see how everyone’s standing behind us…of course, we feel bad for not being able to give back because, in the end, that’s what it’s about, sharing those victories together as a team, as a club, as a city.

I don’t want to play for another team in MLS. I think that says how much I love being here. Everything is in place. I know it’s hard to say ‘be patient and keep supporting us’ because those are just words. You need actions behind that. We’re gonna bust our asses! We’ve got to pick it up not just a little bit, a lot, but I’m confident for next season now we have a year of experience under our belt.

With all the support we have, all the people showing up, every game being sold out, it’s a true privilege for us to play here. It’s hard to put in words our appreciation. We want to show it by winning games, by making playoffs.