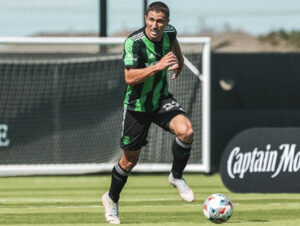 INTERVIEW – Austin FC have experienced a difficult inaugural season. From a player’s perspective, the only thing more arduous than battling for points in a struggling MLS team is not being able to. Sidelined since the end of April 2021 with an ACL injury, Ben Sweat has spent the better part of the season rehabbing (including, mercifully for him, fishing, ‘A lot of fishing!’) and dreaming of returning to the soccer field.

As a young man, Sweat fought his way back into MLS after an initial disappointment. He made it through the grind of his 20’s when so many other players fell by the wayside. In fact, he made it all the way to the USMNT. Sweat, then, is used to rising to a challenge, which is fortunate because this past year has undoubtedly been the most punishing of his career to date.

Now, back on his feet and preparing to rejoin team training sessions, the veteran is eager to reengage with his latest career challenge: competing for Austin FC.

LWOS: What are your earliest memories of playing soccer?

Sweat: The league was called ‘Little Rascals’ or something? I was four or five years old. You had boys and girls on the same team and everyone just followed the ball around in one big group! I grew up in a household with an older brother and a younger brother, and we were all athletes. So, I played soccer and baseball, until I stopped playing baseball early in high school. I feel like most kids were kind of like that, two or three-sport athletes until their parents could see which one they were leaning towards.

LWOS: The majority of your clubs have been on the eastern seaboard, but you started your MLS career with Columbus Crew. What was that experience like, realizing your dream and signing for an MLS team?

Sweat: It’s a different perspective looking back on it now. Being drafted, that part of the dream being fulfilled was super exciting. I went to Columbus and it was one of those situations where I was young, I didn’t know what to expect, and no one knew who I was. That’s how it is for a lot of these young guys. When you go from club to high school, high school to college, like every level you’re starting over. That’s kind of how it was. So, it was tough to get adjusted, to get comfortable, to get back in a good rhythm. I was in Columbus for just a year and then Greg (Berhalter, the then head coach) let me go. I made the move to the Tampa Bay Rowdies (NASL at the time, considered second-tier) and that’s where I finally got professional games. I always knew I could play at a higher level, so the route was just like a big stepping-stone for me to get back into this league.

LWOS: Some players wouldn’t be prepared to take that step back, recording minutes at a lower professional level, believing that could be their springboard forward again.

Sweat: It didn’t come into my head at that time until probably a few years after that. I think when I went to New York City FC (from the Rowdies) is when I was like, it was super important for me to get those games as a 21, 22-year-old, and get that experience, because then I knew what to expect. I knew I was really good at that NASL level, so I knew I could compete at the next level. I’ve always been a believer that everything happens for a reason, you know? It’s not easy dropping down, but it’s the most important thing when you’re 18, 19, 20, 21 years old, to get games. To be with an MLS first team is great, to train with the first team is great, but if you’re not playing then you’re not progressing.

LWOS: So, how did you end up in New York?

Sweat: It was a mix of things. New York at the time was wanting and needing a left-back, they were kind of aware of me.  My agent was also pushing for me to go there because it was a free trial, a free transfer so it didn’t cost me anything to go there. I went in there and I did super well under Patrick Vieira, which is just the craziest part of the story! All these other coaches I played in front of, for it to be Patrick Vieira it’s just, like…there’s so many what ifs in my head. What if I had Patrick when I was like 18 or 19, where would I be?  One of the best midfielders of all time to discover me and really give me my opportunity.

So many players get stuck in the American system – but it’s getting better. You’re seeing a lot more young kids sign homegrown, or signing and then going to Europe. So many players just get stuck in that in that USL system, so many good players. But they just don’t have the opportunity. It’s timing, it’s luck. It’s a grind. There were a lot of players I played with in with the U20 national team, and maybe two or three of them still play. A lot of the guys were gone after their 20s. It’s crazy to look back on that.

LWOS: You spent a season with Inter Miami, before joining Austin FC. Why, after finding your way back to your home state of Florida, would you decide to then head to Texas?

Sweat: Miami went through a lot of struggles, like every first-year team. There were a lot of pros, a lot of cons. I knew Austin was the hot topic for the past year, especially when Claudio (Reyna) left New York to come here. I have a great relationship with Claudio, I love what he does, and how he treats his players. And then Precourt from Columbus, and Josh who was my coach in Columbus and my assistant coach with the men’s national team, there were just a lot of familiar faces.

I also knew what the standard was going to be from the start.  It may not show on our record this year, but this team is good. A few wins and a few goals here and there would change a lot of that. I know they’re gonna build something special here. The city is phenomenal, and obviously the fan base! For me, I would put our fan base up there with LAFC or Atlanta united.  And for this to be the first professional team in Austin, to come in here and to be part of that hype, and to be in a community where everyone follows you and is paying attention, it’s super exciting. That’s why I’ve just been dying to get back on the field, but in due time I will be back.

LWOS: Yes, you’ve been sidelined since the end of April, nearly four and half months, since that game in Colorado. how are you dealing with that, both physically and mentally?

Sweat: Before this, I think my longest injury was a concussion and I was out for a week and a half or two weeks. I’ve only ever missed a few games every year. So, this injury was really tough. I mean, it was just so hard because I was just finding form, just getting into a rhythm, having an awesome preseason, banging in assists, and there was a really good buzz around the team. I was walking into more of a veteran leadership role (he says of his young protégé Zan Kolmanic who’s been called to unexpectedly deputize for him, ‘I just tell him when he’s done well. It’s so important for a player to know they’re performing well, and he’s done well.’), and I know I could have given this club a lot this year.

Mentally…like right after the surgery, the first two weeks after surgery, it was super emotional, crying. I just couldn’t believe I had a whole season stolen away from me. And then even after surgery, weeks later, I kind of went back to that kind of phase, that dark place again. The mental part of it was hard, man, it was really tough. Also, it was the most painful injury I’ve ever had. And it was one of the hardest things gone through in my life. But it’s gotten better every week because I’m finding a routine, I’m finding a rhythm again. I’m going to come back even stronger than before, though, which is phenomenal.

There were so many things going through my head at that time. It was scary. And it’s always scary to be, like, what if I do it again? Like I said, I know everything kind of happens for a reason, so I know tearing my ACL coming back and being successful will add to my story. It’ll give me more to talk about to kids who go through this. I love talking to, like, 10- to 16-year-olds. I’ve played in every league in this country, from club all the way up to the professional level and the men’s national team. This injury just gives me another piece of advice for kids who are going through injuries.

I’m lucky I have a great support group, my wife, my family, obviously, our staff has been tremendous, so, they’ve definitely made it easier. The toughest part was when I was put on IR (Injured Reserve, essentially calling an end to his season). I had to keep reminding myself, ‘I’m out for the year. No matter how good I feel, now, I’m out.’  To sit at these home games and listen to this crowd, I’ve been dying to be in front of fans. I didn’t play in front of home fans since the second to last game last year against D.C. United. So, to get back in that atmosphere, in front of that crowd, and help this team out…yeah, it’s been really hard.

LWOS: Our last and most important question. When are we going to see Ben Sweat back in Verde and black?

Sweat: Alright, so I’ve been on the field doing individual stuff the past three weeks, ball and running. I’ll be doing more next week and then I think I’ll be back playing ‘neutral’ with the guys (in scrimmages, not competing for either team, being a link play either can pass to) I would say the first or second week in October. No contact!

If they wanted to push it, I probably could have been back but there’s no need to rush. Give me the extra three or four months to come back, just worry about next season. But oh my God, I can’t wait to play at Q2 Stadium! The fact I have to wait another five months is just ridiculous, man! So maybe I’ll have the team put together like a little scrimmage for me in the offseason and have the fans come just to give me a feeling of it!

The post Man On: With Austin FC’s Ben Sweat appeared first on Last Word On Soccer.