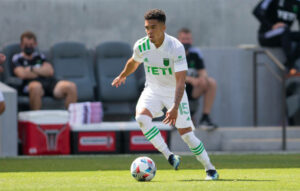 Daniel Pereira gets it. He understands that he’s living the dream of so many who watch ‘the beautiful game.’ Accordingly, when he arrived in Austin for the first time, he beelined it to his new soccer home.

“When I first got here, I asked the guy that picked me up from the airport if he could take me straight to the Austin FC stadium,” Pereira said. “The guy was supposed to take me to the hotel but I was like, no, I want to see the stadium. They were still building it, they didn’t even have a parking lot. But I had to see it. I was like, wow.’”

Thousands of Verde fans have since experienced that sensation. But Pereira is one of the few who get to see Q2 stadium, now, from the playing field. Despite only turning 21 last month, having no previous MLS experience and coming straight from college ball last year, Pereira has acquitted himself on that field remarkably well.

LWOS: Growing up in Venezuela, you had lots of different sports options. Why did you ultimately gravitate to soccer?

Pereira: I started playing baseball when I was little, probably around 5 or 6, because my dad and my uncle played baseball when they were little, so it was kind of like in the family. But then my brother got me into soccer. He is a soccer guy big time. So, I played both for like a year or two. It was just too much for my parents to take me from soccer practice then baseball practice, though, so they told me I had to choose one. My brother was like, “Trust me, you’re gonna be good at soccer. I can tell, just stick with it, I’ll help you with whatever.” So, I choose soccer, and I’ve been playing ever since. Now, my brother (who lives in Spain – a bit of a soccer country!) loves the fact that I’m playing pro. He cries every time he watches me play, it’s just like a dream for him. It’s cool because I look up to him a lot.

LWOS:  You waived your final two years of college to sign up for Generation Adidas. That led to the Superdraft, where you went #1 to Austin. What was that whole crazy experience like?

Pereira: When I first got to Virginia Tech I told my coach (Mike Brizendine), “I want to be here for as long as I can like help the program out, but I really want to go pro”. He didn’t expect much from me and he can tell you that himself if you ever get to talk to him! He wasn’t expecting me to be the player I am today. But he told me after like a couple of games into the season, that he doesn’t think I’m going to be around the program much maybe until my junior year. Then Freshman year I made the All-Freshmen team, 13 ACC, it was a great season for me especially, I started every game. The whole coaching staff got confidence in me. then my sophomore season comes and before the season starts coach is like, “You have a pretty good shot at getting Generation Adidas, you’ve just got to make sure you do your thing on the field”. I never let stuff like that get in my head, I just go out and play.

But then when the season was over, I was talking to a couple of agencies who would tell me, “Hey, Austin FC just asked your trainer for your data, like fitness stuff”, and I knew there were people interested. For like two months it was stressful, man. My parents didn’t know if I was going to stay or I was going to leave, but then the day came. It was a Tuesday, I don’t remember the date but I get the call from Alecko (Eskandarian, at MLS) and he says, “Hey Dani, you’re one of the top prospects. We’re gonna offer you a Generation Adidas spot here in the coming days”, and I’m like, sheesh, this is really happening!

I had to choose an agency to help me out with the process because I don’t know how it works! We negotiated the offer and I signed. Obviously, my coach was happy for me but also mad at me for leaving! But he knew this was what was best for me. He also knew that it was the only way I would leave college, if got Generation Adidas. So we all ended up winning.

so freaking proud of this team, we will all remember this one fosho

and it’s just the beginning

LWOS: Did you know in advance of the SuperDraft where you were going?

Pereira: Generation Adidas players know that they’re gonna get drafted because it’s like a free player for the team that gets you. I didn’t know I was gonna go first, I thought I was going to be third or fourth, I saw somewhere they had me going 17th, so I didn’t know. So, they say my name first (becoming the first South American, first Venezuelan, and first Virginia Tech player to ever go first pick in the SuperDraft) and, like, I’m just mind blown! My parents were crying, they just couldn’t believe it. Yeah, it was awesome. My coach was there, my teammates from college were there, a bunch of my family, my high school coach, too, so it was just all the people that had seen me put in the work throughout the years. It was a beautiful moment.

LWOS: Let’s fast forward to the MLS season opener v LAFC. You’d been playing college ball the previous year and now here you were, in the starting line-up of Austin FC’s inaugural match. When did you know you’d be starting, and what was going through your head that day?

Pereira: In pre-season in every game we played we had two teams, and one was obviously the starting team and the other one was like the second team. I think, regardless, you always play like you’re on the first team, you know, don’t even think about first v second team, because anything could happen. At the beginning, it was me and Diego (Fagundez) fighting for a spot. And I knew he had almost 50 goals and 50 assists, he’s a MLS legend, been playing in the league for 10 years. So, for me to try and take his place was big time. It’s a competition and we don’t hate each other for it. We just know that we’re here to compete.

My first MLS preseason game was against Houston, and I played the worst game of my life! I was so nervous, and I don’t know why, but I was so bad! But Josh told me, “Hey, I know you’re nervous, it happens, okay? At least you got out of the way. So, now, it’s time to perform like we know you can.” The rest of my preseason was much better, thankfully!

Two days before the LA game, we were doing a bunch of drills and you can obviously tell you who’s with the starters. On the day, I was a little nervous. I remember asking Dave (Arnauld, Austin FC Assistant Coach), “Davey, do you remember your first game?” He said, “Of course, man, just enjoy it, have fun. Do what you’ve been doing since you’ve been here, and you’ll be fine.” I got on the field and I was like, “Geez!” I’d never been in that big of a stadium. You had to take in the view. Obviously, we didn’t win, but I think I had a pretty good debut for my rookie year.

LWOS: It’s been a whirlwind year for you, but you seem to have conducted yourself with great maturity, like a seasoned pro. As a young guy away from home for the first time, how hard has it been to adjust to everything?

Pereira: Yeah, it’s a little tough sometimes, you know, because I came from college where all my teammates were my age, so I could just hang out with them all the time and made the same jokes and talk about the same stuff. Then I came to Austin and you live by yourself, your teammates are husbands, they have kids, you gotta be a little more mature. It’s great to have Seb (Berhalter) at the club because we’re the same age, play the same position, so we can relate to each other more. Being away from my parents is a little tough, but it’s what you’ve got to deal with. I can’t do nothing about it, just stay strong mentally. I’m here for soccer. It’s what I love to do!

LWOS: And speaking of different, what are your thoughts on Q2 Stadium and the atmosphere on game day?

Pereira: It’s crazy, man! It’s another world! The first game (v San Jose), I wasn’t able to play because of my injury, so I watched it from the box and you could tell, man, it’s a whole family. Everybody there is there together and it’s crazy how much it means to the fans, you know? Then, the next two games I got to be in the roster, and I stepped on the field and, geez, you can feel the energy and how different it is. It’s just such a great environment to be in.

LWOS: So, what are your goals for your career, short-term and longer-term?

Pereira: I always focus on being where I’m at and not where I’m gonna be. Obviously, everybody has goals. My extreme goal is to make it to Europe, I don’t know where? (a little poking revealed a soft spot for Borussia Dortmund, based largely on their youth policy). I don’t think about it that much. I just want to be here and feel good here and make it to playoffs, we’re in a tough spot right now, so I just want to give my best to the team. We’re trying to make it to playoffs one game at a time. We haven’t gotten the results we wanted but we’re almost there.

Just playing with Alex Ring next to me, Diego, Cecilio (Dominguez), (Sebastian) Driussi, is crazy to me! I just came from college and now I’m playing with these big-time players who have won a lot of things. So, it’s a big change but it’s an awesome change.

The post Man On: A conversation with Austin FC’s Daniel Pereira appeared first on Last Word On Soccer.