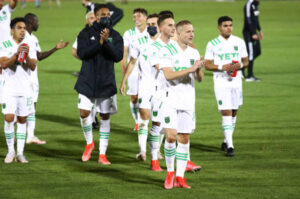 EDITORIAL – Just seven games into their inaugural season and MLS’s newest club, Austin FC, already has a distinct identity. Head Coach Josh Wolff has clearly set his team up to play in a particular way. The Verde are hard to beat, hustle and press, and do their best to take care of the ball when in possession. That’s an oversimplification of all that the team does, obviously. But these key features are undoubtedly front and center – and the Austin FC roster and culture have been established very quickly.

Magic or Moneyball: How Austin FC built a roster that believes

Choosing an identity, a way to play, is one thing. Executing on it is something else altogether. So, how has Wolff and his coaching team been able to establish Austin’s way of doing business so rapidly? And how were they able to secure their player’s buy-in from day one?

In this week’s press conference, Wolff talked a little about the thinking behind the team identity and how that informed recruitment. “We’ve (Wolff and his coaches) been in this league for a long time so domestically have a good idea of the players we wanted to go after. We looked at many different aspects: coachability, what the player’s desires are, what their motivations are, their buy-in to the collective, and their understanding of what we want to be offensively and defensively”.

As important as the coaching is, the answer might be found in the specific make-up of this roster. Austin FC currently has a 27-player squad, among them a few seasoned MLS veterans. Curiously, though, even the ‘vets’ with over 100 MLS appearances to their name – Besler, Ring, Hoesen, Lima, and Fagundez – racked up their count with just one team. The list of centurions registering appearances with multiple MLS clubs? Only Manneh and Jimemez.

In fact, of the 27 players that Wolff has assembled to date, only six have taken to the field for more than one MLS team. Think about that. Only half a dozen players have experienced life outside of one MLS club before their move to Austin. The rest of the squad with MLS experience average 40 appearances, essentially one seasons’ worth. Nine of the squad have no MLS experience whatsoever.

It’s perhaps noteworthy, too, that a quarter of the Verde roster has represented Columbus Crew, current MLS Cup champions.

So, what does this all mean? I don’t think it’s controversial to suggest that the following observations have merit…

Austin FC clearly did not build their roster exclusively based on player ability. As Wolff pointed out, coaches today assess the whole player, taking into consideration ability, experience, track record, medical record, personality, and so many other factors. Austin’s coaches clearly weren’t just filling spots on a roster based on playing position like some high-stakes game of ‘Championship Manager’. Still, the degree of intentionality and care that appears to have gone into constructing this roster is impressive.

Fagundez also discussed the importance of staying the course even when times get tough. “When you’re on a losing streak sometimes, it’s not always easy to stick with the plan. I’ve been on teams where we’ve lost 7 or 8 games in a row and it’s tough. The locker room isn’t happy, people can get aggressive. But with this group, the first thing we said is that we need to stick together. Everyone saw that against Seattle, everyone was battling, it was a team performance. Fagundez concedes, “At the end of the day it can be hard to trust the system, but everybody needs to be on the same page and realize that we’ve been doing well.”

Wolff, Claudio Reyna, and the ATX leadership team have clearly laid a solid foundation. They will be hoping to successfully draw again upon whatever alchemy enabled them to quickly establish the club’s identity when the transfer window reopens on July 7.

The post Magic or Moneyball: How Austin FC built a roster that believes appeared first on Last Word On Soccer.