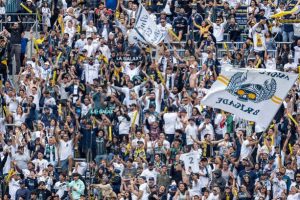 PODCAST – What’s up Internet? This week on Last Word SC Radio, Matt, Rachael, and Jamie get together. We recap all the action from the MLS Cup Playoffs first round. We discuss Austin and Dallas outplaying opponents but having to win in penalties. What went wrong for New York Red Bulls against FC Cincinnati? Are LA Galaxy hot enough to go after LAFC like they did with Nashville? New York City FC looked like 2021 against Inter Miami CF. We look ahead to the Conference Semifinals.

Last Word SC Radio is American Soccer podcast, covering mostly MLS, as well as the USL, NWSL, and U.S. Soccer. We are a part of Last Word on Sports Media. You can subscribe to the podcast on iTunes and many other podcatchers, along with lots of other great content from other Last Word on Sports outlets.

Jamie Rooke is LWOS’ man from across the pond, born down in Devon but studying sports journalism up in London. He lives and breathes the sport whether it be watching his beloved Plymouth Argyle or covering the New England Revolution. When he’s not doing that, he’s probably watching basketball, boxing or F1, cooking, reading, listening to anyone from Loyle Carner to ABBA or just nerding out over Harry Potter as a proud Hufflepuff!