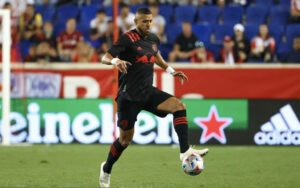 A Luke Stojanovic brace just eight minutes into the match helped Chicago secure a 2-1 win over the New York Red Bulls. The early double was all that was required to help the Fire build on a now three-game unbeaten run. The loss extends a now six-game winless run for the Red Bulls.

New York makes only one change to the team that drew against Cincinnati. John Tolkin is back at left-back over Andrew Gutman, the rest of the team remains the same. Dru Yearwood is out due to yellow card accumulation.

The Fire insert a number of changes to the side that drew against New York City FC. Bobby Shuttleworth is back in goal, Carlos Teran is one of three center backs, replacing Johan Kappelhof. Luka Stojanovic and Fabian Herbers get the nod in midfield, Ignacio Aliseda and Alvaro Medrada miss out. Elliot Collier joins Nnamdi Offor up top in attack, Stanislov Ivanov makes the bench.

First Half: Two quick goals, a benching in a surprising opening half

Chicago took the lead inside the opening two minutes. Quick, short passing outside the area led to Stojanovic blasting one past Coronel to give the Fire the lead. It’s only the fourth goal of the season for the Serbian striker, but a well-taken hit at that. Just six minutes later, Stojanovic doubled his and Chicago’s advantage. Off a long throw-in, the ball bounced off the head of Kyle Duncan onto the path of the Serbian who volleyed his effort past a helpless Coronel. Make that now five goals this campaign for Stojanovic.

Luka Stojanovic with a banger to give @ChicagoFire the early lead!

After that goal, a furious Gerhard Struber made his first substitution in the 19th minute, taking off Casseres Jr. for Andrew Gutman. The move was the equivalent to a benching in baseball, as the Venezuelan had played an awful game. With the Fire now comfortable to sit back and defend, New York held the ball for long spells of the first half. Unfortunately, the 63% possession resulted in multiple crosses and only one shot on target. It was in essence, 45 minutes to forget for Struber and his players, with two of them on yellow cards. The Fire made the Red Bulls do all the work whilst looking for a prime chance to counter.

Second Half: Little else doing as Chicago wins 2-1

Struber went to the bench and subbed off Carmona for Omir Fernandez 10 minutes into the second half. Chicago countered bringing on Robert Beric for Collier.

And the Fire nearly had a third. Off a turnover, Herbers with a head of steam on the ball was closing in but chipped his effort off the crossbar. Wyatt Omsberg came on for Teran who pulled up lame after celebrating a block.

Tom Barlow came on for Caden Clark. He scored on a tap-in late in what was the last kick of the game.

Let’s talk Chicago first. The win marks games unbeaten now; things may slowly be turning for Raphael Wicky and his players. They took full advantage of a Red Bulls team who simply didn’t show up to play. The Stojanovic brace gives him a team-lead five goals, and a welcome confidence boost as they host the Columbus Crew next Sunday.

The Red Bull are in a bit of a shambles right now, maybe more. This performance was painful to watch, and all it took was eight minutes to seal the deal. The benching of Casseres was necessary as he showed a lack of defending for both goals. The Venezuelan has been one of the first names on the team sheet but he has hit a rough patch and is now in the coach’s doghouse.

It’s hard to think of a worse week all season for New York. They’ve traded away Florian Valot to Cincinnati and are looking down the barrel for creativity in attack and a plan when they defend. Gerhard Struber is going to have to work some magic to get his team out of this rut. The team’s play style doesn’t do well coming back from deficits.

It’s now six games without a win, over a month long. Draws and losses against teams below them in the East standings, and they now play the next three games against playoff-bound squads. The first is a trip up north against Montreal in the third game of a gut check month.