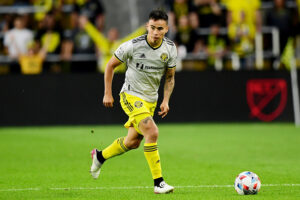 Lucas Zelarayán is one of many players to have experienced both MLS and Liga MX and after many years of the Mexican first division seeing a lot of the limelight, the shine seems to be alternating more in the opposite direction.

Zelarayán will take part in this week’s MLS All-Star Game against the Liga MX All-Stars, getting his first crack at many of his former opponents from his time in Mexico. The Columbus Crew playmaker embarked to MLS in 2020 from Liga MX powerhouse Tigres and since has become one of the more exciting at his position since that time.

The 29-year-old Argentinian has witnessed firsthand the growing talent in MLS and believes the two leagues are growing more similar in skill level and competitiveness.
“There is not much difference between the leagues anymore,” Zelarayán said in a conference call Monday. “In recent years it has been shown that both countries have grown a lot. Matches between the national teams or teams from both leagues have been tight, that means the leagues are at a similar level. MLS has caught up.”

“I believe that each league has their own thing…MLS focuses on the physical ability of the player…In Mexico it’s a little more tactical…But today the football is equally the same.”

It is true that Liga MX sides have continued to dominate the annual Concacaf Champions League tournament, Zelarayán is correct about recent head-to-head matchups on the international level. The U.S. men’s national team is coming off back-to-back tournament wins over Mexico, capturing both the Nations League and Gold Cup trophies this summer.
Gregg Berhalter’s side has also crept just behind El Tri in the latest FIFA rankings and could jump even higher with positive performances this fall in World Cup Qualifying. The Philadelphia Union currently remains MLS’ last chance at ending its losing run in the CCL to Mexican clubs in 2021, currently down 2-0 to Club America in the semifinal round with a home second leg at Subaru Park approaching this September.

Two goals + one assist. No stopping him tonight.@Lucazelarayan31 is the 2020 #MLSCup MVP pres. By @Audi!

Zelarayán helped Tigres win the 2018 Champions League over Toronto FC and since has helped the Crew capture the 2020 MLS Cup, defeating Seattle Sounders at Mapfre Stadium last winter. His first involvement in the All-Star Game is worthy recognition and the playmaking midfielder is keen on walking out of Banc of California Stadium a winner on Wednesday night.
“Each league has its things,” Zelarayán said. “I think MLS focuses a lot on the physical part of the player, and obviously organization matters. Mexico also has its difference, it is much more technical, it focuses more on good play from the first to the last team. Being so close and having so many competitions between them have improved each other.

“We are going to try to take it with great responsibility – we are representing MLS. We are going to try to show the level of this league and also provide a good show for the people.”
The MLS All-Stars have failed to win the last four All-Star Games, last winning in 2015 over English Premier League club Tottenham Hotspur.

The post Lucas Zelarayán: “Not much difference between Liga MX, MLS anymore” appeared first on Last Word On Soccer.