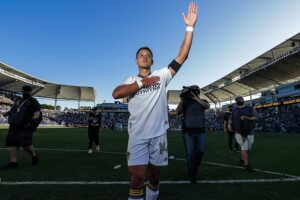 LOS ANGELES, CA – If intention and desire are anything to judge a season and team on, then Los Angeles is winning MLS Cup.

Not only did Los Angeles Galaxy find a 90th-minute game-winner, but their determined 1-0 win in Saturday’s home opener started their campaign in winning fashion. And they did it all against defending MLS champs NYCFC while allowing only one shot on goal.

It’s the type of performance the supporters could applaud, win or lose, as the team’s hunger was on full display. Despite this, it certainly could have gone either way on the scoreline.

Only quick thinking by Galaxy debutante Raheem Edwards in the 90th minute, first to win the ball back after playing a bad pass in L.A.’s attacking third, and then to play a perfect ball to Javier “Chicharito” Hernández on the left side for a composed finish, secured the victory.

Coming over from the Chivas side of Los Angeles probably wasn’t easy, but Edwards made his debut with aplomb, both in the team and in the left-back position by being solid in defense, contributing to the attack, and finding the game-winning assist. His performance will make many G’s forget he was ever a goat, and landed him MLS team of the week honors. Not at all bad for a debut.

Exuding calm, an obviously pleased Edwards kept focused on the long season ahead.

“It’s good to keep the zero, and we got the clean sheet,” Edwards shared. “It’s great, but we look forward to building on it. It’s not done. This is the first game of 34. We’re just going to keep building our defense, and not just from the back, but the whole team in general… Staying compact, staying tight, and making it hard to play against us.”

Edwards claims he got lucky on the goal by “nicking” the ball. That luck allowed him to play in Hernández with what the Galaxy captain said was “the pass of a number 10.” The perfectly weighted ball let Hernández do what Edwards stated his teammate does best. “Chicha did what Chicha does. He puts the ball in the back of the net,” the Galaxy newcomer simply stated.

And it was a lovely finish by anyone’s standards. Hernández received Edwards’ pass perfectly while taking it in stride, cut it back onto his right foot while sitting down NYCFC defender Maxime Chanot, and fiercely struck the ball as if it were a certain someone who won’t call him up to the Mexican National Team.

A marathon and a sprint

It was the perfect bow to a day in which; the team defended well, the midfield worked together, they earned three points, and got positive performances out of debutantes Douglas Costa and Mark Delgado as well.

Upon Hernández’s goal, 25,174 true Angelinos erupted in relief as 90 minutes of worry washed away in an instant and inspired dreams of a sixth cup. It clearly meant much to the team, as Hernández shed tears, Sega Coulibaly led it in cheers in front of the supporter’s groups, and they celebrated together like a true family.

But despite the emotional tears, like Edwards, Hernández didn’t let himself get carried away.

“We need to go step by step. We earned the first three points, but this is not over. This is just the beginning. And we learned from last season. You know that one play matters. One goal matters. One clean sheet matters and one sprint matters,” an always animated Hernández said passionately.

A game-winner at home on opening day isn’t a bad way to start the season, and Galaxy head coach Greg Vanney was certainly pleased with not only the win but with how the Galaxy pulled it off.

He hammered home the point that everyone played a key part in the win, and despite the lack of many chances on goal, insisted their defensive play was much more of a priority.

“That’s the most important thing for me right now. I know the attacking stuff will grow with our group, but we showed the ability to protect our box, to protect our goal. To not have our goalkeeper have to make five saves for us to be in a game that is, you know, 1-0. And for us to win a tough game against a tough team, 1-0, is a huge statement for our group,” the second-year coach explained. “I thought the most important thing… we defended our goal, we defended our box, and we defended our hearts out. And if we do that, we’re going to be fine.”

And if intention and desire are anything to go by, Vanney will probably be right.

Los Angeles will now go east to play MLS expansion side Charlotte F.C. on Saturday in front of an expected 75,000 plus sell-out crowd.