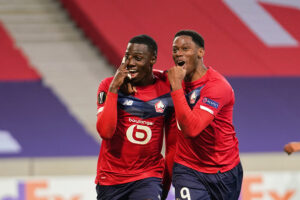 Jonathan David had a bad start to his Lille campaign. There was actually a point where he did not score for seven consecutive games with Lille. However, he ended up scoring 13 goals for Lille in the 2020-21 season.

Some of the most notable ones were the goal against Paris Saint-Germain on April 3, 2021, and the two late goals against Marseille on May 3, 2021. In the end, David played a critical role with Lille winning the Ligue 1 title despite having a slow start to the season. However, some of his former coaches in Ottawa are not surprised by his success.

“He was exactly the type of player you want to coach; he listens and takes advice,” said Hanny El-Magraby, the senior coach for Ottawa’s Mundial FC. El-Magraby coached David for most of his youth soccer career.

Jonathan David: A Warrior on the Pitch

David is known to be a calm and collected person hence why he has the nickname “The Ice Man.” He is also a versatile player and can provide speed for both club and country. The character of David as a warrior on the pitch can be defined by his game against Angers SCO on May 23, 2021.

gives Lille OSC a 1-0 lead in the final game of the season pic.twitter.com/3n6Iq0HoxQ

David would score in the 10-minute, which would end up being the game-winner against Angers. However, he got injured in a 17-minute tackle. He played for 15 minutes trying to play through the game. However, his injury bothered him and he had to leave the game. It was this resilience though that makes David a warrior on the pitch. This is according to Daniel Rainbird of Sportsnet.

Weah is injured and will not be playing in tomorrow’s game against the CanMNT. However, he is carving out a successful career at Lille. The striker made 37 appearances and scored five goals for Lille in the 2020-21 season. This is what his former head coach Christophe Gallier said about his performance back in May.

Galtier told RMC Sport: “In picking Timothy I was looking for someone to run in behind and to put some rhythm into our play. Every time he starts a game he scores. That’s good for him and I hope his goal will be useful to us in the return game.”

Lille springs on the counterattack, and U.S. forward Tim Weah puts the finishing touches on it to add to the club’s lead vs. Bordeaux #USMNT

This includes scoring against Bordeaux in a 3-0 victory on February 3, 2021. David and Yusuf Yazici passed the ball to each other. Yazici would then pass the ball to Weah who scored the easy goal. This shows a glimpse of the chemistry Weah and David share. Weah goes into his detail about his relationship with David with beIN SPORTS USA:

“First off with Jonathan you know I knew when he was coming in that we’re going to be you know close we’re going to be good friends because we’re both from North America and you know he’s such a down-to-earth guy and we just got along immediately.”

The CanMNT-USMNT Game is on Sunday

September 5 vs USA at 8pm (TSN/OneSoccer) {AWAY}

David is a key player on Lille who may one day challenge Alphonso Davies for the best CanMNT player ever. He may have not had the best game against Honduras. However, David will have better games with the CanMNT. He will most likely start against USMNT on September 5 at 8:00 p.m. ET. In that game, they will face the USMNT at Nissan Stadium in Nashville, Tennessee.