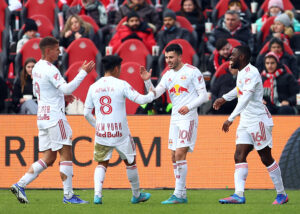 TORONTO, ON – Lewis Morgan was the player of the game as he scored three goals in a 4-1 win over Toronto FC. The New York Red Bulls did not look like the better team to start the game. However, they grew into the game and ended up taking control in their win at BMO Field.

Toronto FC did not generate much offence in the second half.#TFCLive’s defence needs to improve.#RBNY’s Lewis Morgan was the player of the game as he scored a hat-trick.#TORvRBNY | 1-4 | #MLS

Toronto started the first half positively. Luca Petrasso won a corner kick for TFC in the fourth minute of play. Jahkelle Marshall-Rutty passed to Jayden Nelson, who was not able to control the ball in the eighth minute.

It looked like Toronto was playing well and not giving the Red Bulls many chances to score. However, a turnover from Jonathan Osorio resulted in the first goal of the game by Lewis Morgan as Klimala got the assist. Then, in the second goal, Morgan’s shot beat TFC goalkeeper Alex Bono and went into the net. This was very similar to the first goal except this goal was low compared to the first one.

Luca Petrasso did a good job as he passed the ball to Jesús Jiménez. His goal reduced New York’s lead by half. Things were looking good for TFC. For example, Jayden Nelson did a good job to win a corner in the 39-minute of play for his team.

40’ #RBNY’s Lewis Morgan scores a hat-trick! Patryk Klimala played a critical role in the goal as he was credited with the assist! #MajorLeagueSoccer#TORvRBNY | 1-3 | #MLSpic.twitter.com/lBUX0LvwFe

Then it fell apart for Toronto FC. Marshall-Rutty was not strong enough and Patryk Klimala overpowered him. Jacob Shaffelburg did his best. However, he was the only TFC player back as Morgan was in a one-on-one with goalkeeper Bono. Morgan shot the ball past Bono low and it was back to a two-goal game.

Worse, was that TFC gave up the second goal in the 42-minute as they left Aaron Long all alone for a free header. Then Shaffelberg got injured and had to be replaced to start the second half.

62’ #TFCLive’s Carlos Salcedo will just get a yellow card as he avoids a red card after a further VAR review.#TORvRBNY | 1-4 | #MLS

Alex Bono made a great save in the 68-minute of play. Marshall-Rutty did not play well as he lost the ball forcing Bono to make that save. Toronto FC’s Carlos Salcedo just get a yellow card as he avoided a red card after a further VAR review. Carlos Coronel stopped the shot of Osorio thanks to a great pass by Michael Bradley in the 74-minute. Pozuelo’s cross was also stopped by Coronel. Caden Clark’s great pass to Klimela in the 76-minute ended with Bono making a third save in the second half.

Game summary and games coming up for both teams

Seven goals through our first two games is the most goals in the opening two matches of a season in franchise history. pic.twitter.com/SXJ7e4SSeC

Toronto FC’s defence was subpar on Saturday. In particular, the third and fourth goals they gave up were completely avoidable. One ended with a one-on-one breakaway between the player and the keeper, and the other one was an unmarked free header. As a result, Toronto only has one point in two games as they drew 1-1 with FC Dallas on the road.

This is while the Red Bulls scored seven goals in their first two MLS season road games. As a result, it was the most goals scored in franchise history. They scored three goals against the San Jose Earthquakes on the road.

Also, if it was not for TFC goalkeeper Alex Bono making three saves, Toronto FC would have given up more goals in the second half. The Red Bulls were on the front foot to start the second half and Morgan almost scored his fourth goal. However, his goal was just offside.

The game on March 12 will be televised nationally on TSN and will also be shown on Bally Sports Ohio. They will face Trillium Cup rivals Columbus Crew SC at Lower.com Field at 1:30 p.m. ET. They will then host DC United at BMO Field. The game will be televised nationally in Canada on TSN. It will also be shown on NBCSW and dcunited.com on Saturday, March. 19 at 3:00 p.m. ET.

Three talking points of the game:

A good day for the Canadian Premier League. In a game where the Red Bulls dominated, there were two former Pacific FC players that played well. Kadin Chung created a corner for his team while Lukas MacNaughton had a header that missed Saturday’s game.

Lewis Morgan set the tone of the game. Scoring three goals in the first half was a massive feat for Morgan. However, his first two goals in particular were critical as the New York Red Bulls were not playing that well at that time.

Carlos Salcedo avoided a red card. VAR was used for this game on Salcedo’s tackle in the second half. It was a dangerous tackle that warranted a yellow card. However, it might be a borderline red card as he did make contact with the ball. In the end, though, a yellow card was the right decision as TFC retains Salcedo.

The post Lewis Morgan secured a hat-trick in a 4-1 Red Bulls road win appeared first on Last Word On Soccer.