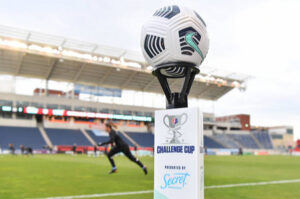 EDITORIAL – Sometimes you see a tweet and the idea in the tweet isn’t groundbreaking in and of itself but it sparks a thought in your head that you can’t stop thinking about. The tweet below as got me thinking about the W in NWSL.

Let’s Talk About the W in NWSL

NWSL, you’ve got a trans player who doesn’t use female pronouns in your league, maybe it’s time to revert to Player of the week/match (even if it means saying goodbye to the alliteration).
You cool with that, @budweiserusa? https://t.co/viS3jcMEa5

The NWSL — and the WNBA and the NWHL and nearly every other league in this category — position themselves on the opposite side from men’s league, in soccer’s case MLS. They give an alternative to these leagues for another segment of the population. But in doing so lean heavily into the binary that our society has set up between men and women while giving so few options to anyone living in between the two extremes they become a new sort of exclusionary all on their own.

As a side note; I’m not proposing letting the NFL, NHL, MLB and MLS off the hook for their lack of inclusion. I am simply not someone who covers any of those leagues.

The NWSL has always had a semi-unofficially enforced femininity; in some ways insidious, in some ways silly and in some ways a mirror reflecting back what so many of us have been shown all our lives. Ponytails and pink, Women of the Week” and girl power have long been used as marketing.

A very “won’t you think of the little girls of the world” has always been one of the underlying through lines of the league. But the hard leaning into all things women and typically female is not only can feel disingenuous for a lot of women just in general but it’s outright exclusionary to a segment of fans and at least one player — and possibly more — in the league.

Women have so long been excluded from leagues that were home to only men they wanted to create their own space. But in doing so it feels like they have made an over correction because of past trauma. So heavily gendering simple things like “Women of the Week” when “Player of the Week” conveys the same thing is saying — if the league understands or not — that non-binary and trans people are not on their minds.

And when the NWSL explicitly thinks of a future world where a trans woman is on a roster they are more worried about her testosterone level than the idea of minimizing harm. While the NWSL policy on transgender athletes mirrors so many in the world, it’s the type of mirror that forces on one detail — testosterone — at the exclusion of nearly anything else.

There are ways to lift women up without having to gender awards, there are ways to support players without giving them a pink battle ax — and to be clear the color pink is not the villain here — there can be work down to support women without having to inspect trans women and men and non-binary people so much closer at the same time. The NWSL is doing things without thinking or at least without thinking past the first stage of the issue.

To be clear I’m not asking the NWSL to wholesale change overnight nor am I expecting any and all reference to nearly all players identifying as women to stop. I am suggesting the NWSL can and should be a leader in being better about both the language they use, the policies they put in force that are about the bodies of people who have heavily scrutinized bodies already and maybe turn off the Spice Girls “Girl Power” remix.

TL;DR? The NWSL should stop dousing themselves in pink war paint and make a change that costs nothing but a little compassion.

The post Let’s Talk About the W in NWSL appeared first on Last Word On Soccer.