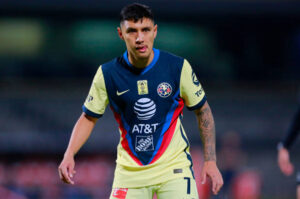 Much like the first leg, Portland got off to a lethargic start in this game. America had more of the ball and more of the chances to start.

The home side broke through in the 21st minute. America pass the ball crisply through the final third, eventually finding Mauro Laínez with plenty of space and time. He sent an accurate cross into the box to Viñas who got up to head it into the back of the net. He was unchallenged on the header.

Portland lacked any quality going forward, especially from the run of play. Their one decent look in the first half came on a corner. Diego Valeri found Felipe Mora for an off-target header.

Things opened up in the second half with the Chara brothers and Mora all getting looks at goal. A questionable penalty call gave America a 2-0 lead however. Leonardo Suárez and Claudio Bravo went shoulder to shoulder in the box. Bravo got a leg in front of Suárez as Suárez hooked his arm around Bravo’s, dragging him down as he went to ground himself.

VAR took a look, but the call stood. Federico Viñas converted, making it 2-0 (3-1 on aggregate) on 59 minutes. Portland won a PK themselves four minutes later as Mora was clipped on the follow through of a shot. Valeri converted, meaning Portland needed just one more away goal and they’d advance.

It was not to be as Leonardo Suárez scored with 20 minutes to go. Dribbling forward in transition, he cut inside at the top of the box, and put the ball into the bottom far corner on his favored left foot.

PKs on VAR, again: Just like the first leg, two penalties were called in this game. Once again, Bravo conceded one. The one in favor of Portland in the first leg might have been soft. Both in this game were soft. Concacaf officiating with VAR was poor, but mostly even.

Poor starts, poor execution: The Timbers again had a bad start and it cost them. They were down 1-0 at halftime again. While the performance improved in the second half, execution in the final third again left much to be desired. It wasn’t good enough. If you can’t score a non-PK goal in 180 minutes, it’s hard to argue you should win the tie.

One last hope: With this result, Philadelphia Union are the only MLS team left standing in CCL, with three Mexican teams through to the semifinals.