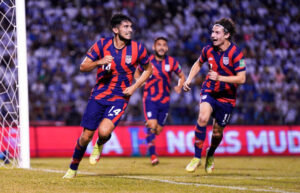 PODCAST – What’s up Internet? What a week it has been on Concacaf World Cup Qualification! On this episode, Matt and Dan recap the three matches of the USMNT Octagonal September window.

We break down the draw at El Salvador. Dan discusses his in person experience in Nashville. Then we try to make sense of Wednesday’s win in Honduras.

In the Round Table, we cover the MLS Cup Playoffs Schedule including a Thursday game.