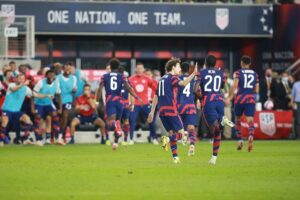 PODCAST – What’s up Internet? Today on Last Word SC Radio, Dan and Harvey meet up for a USA Mexico preview and more. The boys break down the USMNT roster and look at key additions and snubs. They discuss how Christian Pulisic should be used and what’s up with Mexico’s squad and Tata.

The guys do a whip around on the other matchups in Concacaf for this window and finish the show off with USA Mexico Pick ‘Ems.