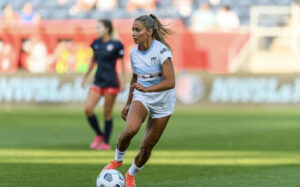 What’s up, Internet? For this episode, someone who isn’t Matt Pollard gives the usual Last Word Soccer Club Radio introduction. In this NWSL-only show, Rachael Kriger hosts and is joined by Trebor Tracy to discuss all things around the league ahead of the Expansion Draft and the Draft.

The two begin by discussing recent trades throughout the league, giving their takes on two of the bigger trades. Trebor discusses and breaks down Angel City FC’s trade for Sarah Gorden and Julie Ertz. Rachael takes on Kailen Sheridan going to San Diego and Ali Krieger and Ashlyn Harris taking up shop at Gotham.

Then, the two dive into Expansion Draft discussion. Rachael and Trebor both agree Megan Oyster will go, but then debate between if Angel City and San Diego will take either Canadian international Sophie Schmidt or Veronica Latsko. Finally, the show ends with discussion on recent head coaching hires, Alex Morgan making a move to San Diego and the Washington Spirit ownership debacle.

Finally, Trebor and Rachael discuss the new San Diego crest… which dropped during recording! Rachael loves it, and demands a pink kit in the NWSL, to which Trebor agrees. What do you think about the crest?

What do you think about @sandiegowavefc new look!? The #NWSL expansion club debuted this look earlier today. pic.twitter.com/cOu6UkFBH8

Trebor Tracy is an Editor at Last Word. He is also a writer for SB Nation, covering LAFC, LA Galaxy, Angel City, SD Wave FC and various International matches. A native of Oakland, CA, he moved to LA in 2015, having covered LA soccer since 2018. Avid supporter of women’s sports, always willing to talk the beautiful game. Arsenal fan molded by endless hope and expected disappointment. Outside of sports he can be found in the mountains, telescope in hand, gazing out into space. Talking that talk on things LA sports.