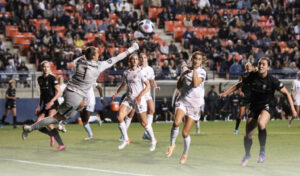 What’s up, Internet? This weekend, we’ve got Rachael Kriger and Trebor Tracy back to talk about the NWSL and the Challenge Cup tournament taking place right now.

They begin by discussing the first weekend of action. Trebor was on hand for the Angel City FC and San Diego Wave match, as the two expansion sides faced off against each other for their first league match. Trebor gives his account of the game and the experience of being at the match. Of course, Trebor gives his expectations — and excitement — for the two California sides.

Next, with 12 teams in the NWSL, Rachael and Trebor take six teams each and discuss their records from last year, players to watch this year and any other comments. We go in alphabetical order.

In the final segment, the two recap the latest NWSL news, including the hiring of Jessica Berman as league commissioner. Also, they talk about the NWSL collective bargaining agreement and what the offseason will look like with free agency. Then, Rachael gives us a recap of Concacaf Women’s World Cup Qualifiers and why she thinks Jamaica won’t qualify for 2023.

Trebor Tracy is an Editor at Last Word. He is also a writer for SB Nation, covering LAFC, LA Galaxy, Angel City, SD Wave FC and various International matches. A native of Oakland, CA, he moved to LA in 2015, having covered LA soccer since 2018. Avid supporter of women’s sports, always willing to talk the beautiful game. Arsenal fan molded by endless hope and expected disappointment. Outside of sports he can be found in the mountains, telescope in hand, gazing out into space. Talking that talk on things LA sports.