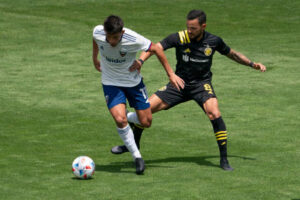 We break down what’s gone wrong for Minnesota United FC who have lost their first four games of the season. The group discusses Philadelphia Union being the only MLS team left in CCL, and manager Jim Curtin’s comments after the second leg.

Then we take a look at four MLS teams that have gotten results but whether they are contender or pretender is up for discussion. In the Round Table we have MLS news, a USMNT Nations League Roster, and Weekend Pick ‘Ems.