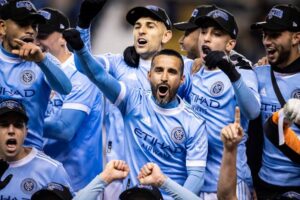 CHESTER, PA – Sunday afternoon, Philadelphia Union and NYCFC faced off in an Eastern Conference Finals matchup rife with suspensions, injuries, and players in COVID Protocol. With Philadelphia missing eight players including their starting defensive line and NYCFC without MLS Golden Boot Winner Valentín Castellanos it would be a tightly contested first half which saw no goals for either side. An own goal to open the second half from NYCFC was quickly canceled out by a Maxi Morales goal tying things at 1-1. But it would be NYCFC’s Talles Magno in the 88-minute to break Union fans’ hearts and send NYCFC to the MLS Cup final in a 2-1 victory.

For a Philadelphia backline that was missing all of its regular starters, the first half was marked by solid defensive stands for both sides. The first shot on goal came in the 12-minute on a Jack McGlynn free kick from distance which Sean Johnson comfortably shuffled toward and caught.

The next best opportunity for either team really wouldn’t come until the 31-minute when Olivier Mbaizo worked his when in behind NYCFC defense. Charging down the sideline, Mbaizo played a dangerous ball into the near post which was just cleared away by Alexander Callens.

NYCFC’s best chance of the first half came on a 36-minute free kick played in by Jesús Medina finding Callens in the box for a header just high and wide of the goal frame.

This prompted a 37-minute counter-attack from Philadelphia after McGlynn in the midfield pushed a ball ahead for Jamiro Monteiro. Monteiro played a well-executed bending pass behind NYCFC’s defense for a sliding shot on goal from Kacper Przybylko, covered well by Johnson.

The Union would come out fast in the second half, marching down the field in the 46-minute behind Dániel Gazdag who dribbled into the box and laid off for Flach, slamming it with the outside of his left foot and forcing a sharp save out of Johnson.

NYCFC would find themselves on the attack in the 55-minute as Malte Amundsen on the left-wing flew a ball into the box for striker Héber. The Brazilian was able to drop it off to Moralez who sent a one-touch pass to Medina at the top of the box but a weak shot was easily saved by Matt Freese.

Winning back possession and working the ball with some good passing in the midfield, Moralez again picks out Amundsen on the left-wing outside the box who hits a shot just over the crossbar in the 57-minute.

A triple substitution in the 58-minute for NYCFC which included Gudmundur Thórarinsson for Amundsen, Ismael Tajouri-Shradi for Medina, and Magno for Héber saw Philadelphia manage an excellent scoring opportunity in the 63-minute.

A Gazdag ball from deep out was placed over NYCFC’s backline and subsequently tapped in by Callens who was pressured by Przybylko, putting Philadelphia up 1-0 on the own goal.

Their lead wouldn’t last however as NYCFC quickly moved to the attack when after a throw-in they worked the ball to Chanot for a shot on goal from distance which saw Freese with another save but he couldn’t hold the ball. It bounced out to Tajouri-Shradi who got just enough on it to find Moralez for a calmly placed shot beyond Freese tying the game at 1-1.

In the 75-minute, Moralez switched the field on a free kick to James Sands who’s able to find Tajouri-Shradi on the right-wing. Tight marked, Tajouri-Shradi swings a cross in which is met by Callens for a close header on goal, well parried away by Freese.

In the 85-minute, some good work to maintain possession by Philadelphia found José Martinez sending a ball into the box from about 10 feet out. Rising to meet it was homegrown product Nathan Harriel unmarked toward the back post, but pushing the header just over the bar for what seemed a sure winner. The missed opportunity kept things tied 1-1 with just 5+ minutes remaining with the game looking likely for extra time.

In the 88-minute, a poor pass from Moralez was picked up by Mbaizo who turned off for a split second allowing Thòrarinsson to steal it inside the box for a quick pass to Magno between two Union defenders. Magno is just able to get a touch in it puts it out of reach of Freese and sends NYCFC into the lead at 2-1.

TALLES MAGNO FOR THE LATE LEAD IN THE CONFERENCE FINAL!

The 90-minute would be marked by Philadelphia making their final two subs in bringing on Anthony Fontana and Paxton Aaronson for Harriel and Flach respectively. NYCFC took the opportunity to find one more chance as Tajouri-Shradi looped a ball to Moralez in the box who took a shot from a tough angle one-on-one with the keeper and put it just across the face of the goal.

Four added minutes came and went with a tired and depleted Philadelphia squad failing to find one more chance. NYCFC went on to see out the 2-1 victory on Magno’s last minute winner, sending City to the 2021 MLS Cup Finals as Eastern Conference Champions. NYCFC will take on Western Conference winners Portland Timers in Portland on Saturday, Dec. 11.

Tough night for Philly: Losing eight players to Covid safety protocol this week was no doubt disheartening for the Union and their fans. In spite of the challenges thrown their way, Philly’s fans turned out to Subaru Park and their team put in a very strong performance with a limited squad. Tough not to advance after almost prevailing against all odds but a showing to be proud of nonetheless.

NYCFC advance without Taty: Without several players of their own due to injury and suspension, most notably NYCFC was missing star striker Taty Castellanos who picked up a red card in their Eastern Conference Semifinal win. While questions we’re asked of where the goals would come from this weekend it was two from Moralez and Magno that helped NYCFC get it done with Castellanos returning for the Cup final.