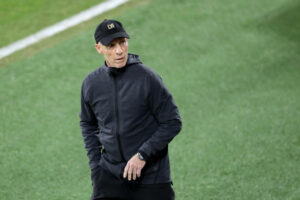 If I had told you prior to the season starting that one LA team would be firmly in the hunt for first place in the Western Conference, while the other struggled for a playoff spot, you’d have surely pegged LA Galaxy as the latter. However, here we sit, just 14 matches left in the season, and the roles are reversed. LAFC host the Galaxy today, in what is the biggest rivalry match they’ve had up to this point.

The LA Galaxy currently sit in fourth place in the Western Conference, just seven points off the first-placed Seattle Sounders. While their season as a whole has been better than expected, their recent stretch of matches has left more to be desire. Their record over the last five matches is 2-1-2, with their last two matches at home resulting in losses.

In fairness to them, they have had to deal with key injuries, navigating International tournaments, and going nearly three months without star striker, Javier “Chicharito” Hernandez. “For us, regain momentum. This is the first time we lost two games in a row, so we want to rebuild some momentum out of that and the fact it’s a derby just adds to the intensity of it all.” Those were Galaxy Head Coach, Greg Vanney’s words as he spoke to media ahead of the match. While this isn’t a must-win for the Galaxy, they want to keep pace with a Seattle side that is slowly pulling away with the top spot in the West.

For the team across town, in the heart of LA, this is very much a must-win. Which, on the surface, seems unfair. With 14 matches left, while they aren’t in the playoffs at the moment, they sit just three points out. However, their results this season just haven’t been there. In addition, they’ve, at times, felt hopelessly lost, grasping for answers. Tonight kicks off a three match home-stand for LAFC, with all three opponents above them in the standings. Unfortunately, they will have to do so without star striker, Carlos Vela, who’s injury in the Vancouver match will keep him out of this one.

Head Coach Bob Bradley understands how important this match can be to kickstarting the team for the rest of the season, saying in part “we’re being tested. Now is the opportunity to put that period behind us and get a really fresh start for the finish of the season.” Coming into the match the black and gold are in the midst of the worst stretch they’ve had in Club history, going winless in seven straight matches, having lost their last four.

More than bragging rights on the line in LA.

Even without the myriad of storylines heading into this match, this is always an intense affair. Even without the match’s two biggest stars and goal-scoring threats, fireworks will fly. This is El Tráfico. This season, more than any other, with plenty on the line. Both sides in the midst of a postseason push, both looking to rebound off prior poor performances, and both look to hold bragging rights over the other.