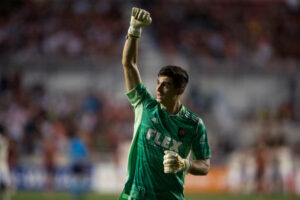 For the first time this season, LAFC have won back-to-back matches. In a season that has seen them struggle to find consistency, this recent stretch has sparked some much needed hope. In addition to being the second straight win, last night was another three points while on the road. It marks only their third win on the road, since returning to play after MLS Is Back, 2020.

When you’re struggling, sometimes the thing you need most, is a bit of luck. That is precisely what LAFC received in the 39th minute. A poor pass from Austin FC goalkeeper, Brad Stuver, was intercepted by Kim Moon-Hwan. The defender played a bit of one-two with Carlos Vela, only to receive it again with a chance at his second goal. However, Stuver did well to recover and save the first shot, only for it to rebound and fall right onto the foot of LAFC midfielder, Jose Cifuentes, for the leading goal late in the first half.

The black and gold endured constant pressure throughout the majority of the match, as Austin FC searched feverishly for the equalizer. However, in the waning moments, LAFC found the dagger, securing the three points with a second goal in the 89th minute. Carlos Vela put through one of the best passes on the night, sending Diego Rossi on his run, slicing through the middle of Austin’s defense. With just the keeper to beat, the Uruguayan remained as cool as you like, putting the ball through the back of the net, while putting the dagger through the verde hearts of Austin FC faithful.

Start of Something Special

While this may only be the first time all season LAFC have enjoyed two straight wins, it doesn’t mean they’ve been as bad recently, as they were to start the year. Despite having to deal with nagging knocks, travel on the road, and a packed schedule, LAFC have been winners in three of their last four matches. Even more impressive, all three wins were shutouts, as the defense continues its improvement from seasons past. Perhaps the brightest light on the defense, has been the recent play of 20-year-old goalkeeper, and new signing, Tomas Romero.

You know the rules, if you play well for a stretch, or have a world-class match, you get your own section. Tomas Romero has been on a meteoric rise since his arrival, and first appearance, with LAFC. After acquiring his homegrown rights from Philadelphia Union for $50k in GAM, LAFC signed the 20-year-old to a contract, and have reaped the benefits since. Not only has Romero done well enough to warrant play time, he has made the position his own, putting in top shelf performances that have many ready to anoint him keeper number one. In just four starts, Romero has amassed nine saves, with three of the biggest, coming in the same match, a 0-1 win on the road against Real Salt Lake.

A personal pet peeve from last year, was the constant rotation at the goalkeeping position. It felt as though one bad moment, or one bad match, resulted in a goalkeeper being sat out the next time out. For me, players, especially young ones, need room to make mistakes. They should be allowed to work out of stretches of poor form, when they inevitably come. Its understandable, in a season such as this, with so much pressure, there may not be time to allow players to work through long stretches of poor play. However, with a young, blossoming star, it’s sometimes best to give them room to grow, make mistakes, and learn to improve when the pressure is at its highest.

Wide Open in the Wild West

This might be the most competitive we’ve seen the Western Conference for at least a decade, if not ever, especially in this modern era of MLS. For as dominant as Seattle, LA Galaxy, and Sporting KC have looked, they only remain 16 points clear of postseason safety, a bad run away from being on the outside looking in. This has proven to work in LAFC’s favor, as even given the rough start to the 2021 campaign, they sit in fifth, just 11 points off first place, with half a season left to play. In addition, the recent wins have come despite the black and gold not playing anywhere near their capabilities. In each of their last four matches, they have failed to win the possession battle, losing it again last night, 60% to 40%, but have done well to take advantage of the chances they do have.

Three wins in four matches. Two straight while on the road, three of the last four ending in shutouts for the opposition. While it is still too early to declare LAFC ‘back’, they very much are arriving. They now get to enjoy ten days off from matches, to rest, recover, refocus, and do what is needed to build on the foundation they’ve set. Even if they don’t return to dominant form, they’ve proven they can win, consistently, while not playing their best. Sometimes, that’s just as important.