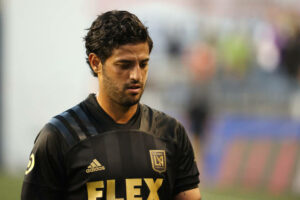 Los Angeles, Ca – To say this season has started poorly is an understatement. The black and gold were tabbed by nearly everyone to challenge for the MLS Cup. Certainly, nobody had them lower than third.  While the season is still in its early days, LAFC have already made history, of the wrong kind. For the first time in Club history LAFC find themselves dead last in the conference. In addition, their five goals through five matches, is the lowest goal tally through the first five matches of a season, that they’ve had. However, today LAFC look to overcome the rough start to 2021, as they not only welcome the Colorado Rapids, but a hefty amount of fans.

“The key at the moment, is to see the things we are doing well, but to understand that there’s details that need to be improved” stated LAFC Head Coach Bob Bradley. Those improved details he mentions, having to do with the lack of production up front. While LAFC once again faced the start to a season short-handed, they weren’t lacking for chances in matches. In their last three matches, LAFC have taken a combined 37 shots, with 12 on target. In addition, only once, against the Houston Dynamo, were they out-shot for the match.

The chances are there. Anyone who has watched an LAFC match can see, the space, opportunity, and even runs inside the box, are all there. The issue has been, as Bob Bradley put it, the “details.” The team’s current top goalscorer, is Corey Baird. A player who, while off to a great start, is a new signing yet to fully integrate himself into the style with which LAFC have the most success. While it’s uncertain whether Carlos Vela will start or not, his appearance last week was a welcome one.  Obviously,  scoring goals wins matches, but for a team not typically known for a stout defense, it’s especially true. They don’t have to light the league on fire, but they do need to produce more than a sizzle, if they are to succeed this season.

While most eyes are on the return of number 10, these eyes are set on the return of the 3252. While select season ticket members had been allowed to attend matches previously, tickets for today were available to the general public. It may not be a completely sold out Banc, but fans will be there, en masse. Let’s be honest, we all know LAFC are a completely different team at home, with a full crowd behind them. If ever there was a match to begin to turn things around, it’s this one.

A return to normal.

Starting this weekend stand Shoulder to Shoulder in vaccinated-only zones at @BancStadium.

Bear with me on this. While the recent losses and draws have been tough, they have been against the best teams in the league right now. The Seattle Sounders and LA Galaxy aren’t just the top two teams in the Western Conference, but in the league. That makes it hard to really judge exactly where LAFC are this season, and beating on the lower tiered opponents, doesn’t help either. However, the Colorado Rapids are a perfect test.

A side normally cast off as an “easy” team, has found early success, sitting in fourth, but tied on points with third place San Jose, and winners of their last three matches. Not the most dominant side, but a worthy opponent to use to get a feel for how this season might go for the black and gold. While it remains very early in the season, piling losses and draws only extends the gap from where this team expects to be.

This is one of those moments where there really isn’t much to say. We all know LAFC have started poorly. The team knows they have started poorly. The only difference is now, there needs to be a slight sense of urgency. The panic button isn’t being pressed, but there needs to be a need to start winning, now. While they would only need to achieve seventh to reach the postseason, having a more favorable road to the Finals should be a priority. You may not be able to win a championship this early, but you can certainly lose it. Time to get back on track.

The post LAFC Look to Overcome Rough Start to 2021 appeared first on Last Word On Soccer.