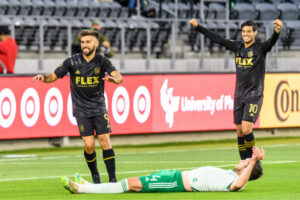 Los Angeles, CA – After a brief appearance late in the second half of last week’s loss to the Seattle Sounders, Carlos Vela made his return. While the return of your best attacking player would provide an obvious boost, Vela’s return was pure Nitrous. The return of Carlos Vela lifted LAFC to a much needed win over a pesky Colorado Rapids side that pushed until the end.

While all eyes were on the return of El Capitán, it was Diego Rossi who made his presence felt just as much throughout the match. First, in the 14th minute, when he got on the end of some beautiful passing. Corey Baird was able to get enough space to find a running Rossi, and the Uruguayan slotted it home for the lead. The goal wasn’t the prettiest, nor quickest, finish, but the slow roller was enough for the early lead.

The play worked so well, LAFC appeared to run it again in the 33rd minute. On a nearly identical play, Carlos Vela took the place of Baird, darting across the box, picking out a Rossi in full sprint down the left side. Rossi got on the pass, and this time launched a rocket that whizzed past the keeper for his brace, extending the lead for his side.

Diego Rossi’s goal to give him a brace in the first half. Carlos Vela making an impact on his return, with the assist. #LAFCvCOL | 2-0 pic.twitter.com/xFulufrP8S

Two goals would end up being enough for the win, but not without some second half drama in the 50th minute. The Colorado Rapids were able to catch the LAFC defenders ball watching briefly. Diego Rubio lofted a pass over the defense and onto the foot of Michael Barrios, who snuck in a shot underneath Pablo Sisniega, cutting the deficit in half. However, it wouldn’t be enough, as the match would finish in favor of the home side, 2-1.

One thing was extremely obvious after last night. Carlos Vela’s importance to the success of this team, cannot be overstated. This is a completely different team with Vela, compared to without him. From the tangible, sharper passing, movement, opening up more opportunities. To the intangible, instilling confidence and belief within his teammates. From kickoff to final whistle, this was by far the best performance of 2021 from LAFC, and it wasn’t even close to the best that they are capable of, and expect from themselves.

While it’s always great to have a healthy, full squad at your disposal, it is a bit worrying just how reliant they are on one player. Carlos Vela is an immense talent, but truth be told, this team has talent enough to win without him. Perhaps not an MLS Cup, but far better than dead last in the conference, with just five points in five matches.

You can’t talk about last night without mentioning a return just as important to LAFC’s success as Carlos Vela. The return of the 3252, sort of. While we are still a few weeks away from a completely sold out, absolute packed Banc Of California Stadium, we did see a return of a hefty amount of fans last night. With designated vaccinated sections, the team was able to open the gates to the general public for the first time since March of last year. Head Coach Bob Bradley felt the energy, saying, “Even without it being packed, the atmosphere made such a difference for us.”

The narrative throughout most of last year was the “poor performances” from the defense. The position group was often the scapegoat for many a bad performances and blamed for a handful of losses. However, just as we cast doubt, we must praise. This season has seen the back five, defenders and Pablo Sisniega in goal, have played superbly. Despite the tough start to the year, LAFC have only allowed seven goals. For comparison, that’s third best in the conference, behind only Seattle (2) and RSL (6). With Segura and Murillo anchoring the middle. Blackmon and Palacios on the flanks, with the added depth, the defense is quickly becoming one of the better position groups within the squad.

A win, is a win. This wasn’t “just the Rapids.” That is disrespectful not just to LAFC, but to a Colorado side that had won three straight coming into Saturday. Even in defeat, the Rapids will leave Los Angeles feeling like they could’ve won, and they very well could have. LAFC didn’t put together a typical, dominant performance we usually see, but its a start. A much needed three points, and hopefully, some momentum for the future.