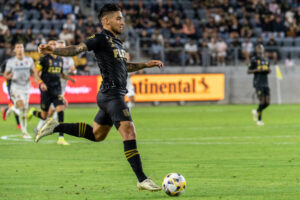 In a season that has seen more downs than ups, an injury bug run rampant, and second half collapses, LAFC have continued to fight forward. Picked to dominate the Western Conference, and finally reach MLS Cup success during preseason, the black and gold find themselves fighting just to reach the playoffs. While the former goal is far from obtainable, as crazy as it seems, the latter is still very much within reach.

Are LAFC back? Three straight wins, and tons of newfound confidence have LAFC looking like old selves

The black and gold came into the match needing a win. To be honest, that will be the mentality for every match going forward, as they are in the thick of a fight for the final postseason spots. While LAFC did have several key players missing, namely, Eduard Atuesta, who suffered an ankle sprain in their last match. Despite being short-handed, many expected LAFC to come out on top, over an Austin FC side that has been near the bottom of the standings all season. That’s exactly what they did, coming away with a 2-1 win.

For a brief moment in the early stages, it looked as though Austin FC might pull off another upset at home. Having gotten space, and played key passes for what looked to be a goal in the 13th minute. However, a trip to replay saw the referees determine a player was offside in the build-up. It wouldn’t be the only run-in with VAR for the hosts. In the 57th minute Austin FC was hit with a handball call, in the box. The defender, while trying to avoid getting hit with the ball, turned, but left too much of his arm out. At least, that’s how the referees deemed it, as they awarded LAFC the penalty.

Cristian “Chicho” Arango, made it four straight matches with a goal, as he stepped up to the spot, and buried the penalty for the lead going into break. Diego Fagúndez wasn’t about to let the home side go down like that. In the 67th minute, he followed up on a shot that ricocheted off the post, and put it in the back of the net to bring it level. However, it was LAFC’s night, as they got a much needed goal from Danny Musovski in the 81st minute to give them the lead, the win, and a critical three points.

The @SanManuelCasino Thrill of the Match: Cifu threads the needle, Moose finishes it. #LAFC pic.twitter.com/xAUClGG7yn

The interesting story for both sides in this match had to be their second half performances. Both sides tended to lose more matches late, than most of the others in the league. Unfortunately for the home side, they once again had to suffer through an opponent scoring a game winning goal past the 80th minute mark. In a match where they definitely had chances to win, they’ll be kicking themselves that they didn’t at least escape with a point.

This one is the toughest question to answer. This team over the last three matches has looked completely different to the team we’ve seen the previous 20 matches. What is clear, is this squad has confidence again. They are stepping onto the pitch with the belief that, even down men, they are the best team there and will prove it. They have a long road ahead of them, but if there was ever a time to turn things around, it’s now. So far, they’ve done just that, but whether it translates to a magical postseason run, remains to be seen.

While this may have been “just Austin FC,” it was still a massive win for LAFC. That’s what they need more than anything right now, wins. No matter how good, bad, or ugly. Luckily, they’ve looked really good recently and appear to have finally woken up from their slumber. All they need is a ticket to the dance, and from there, well. We all know how the MLS can get, especially in the postseason.

The post LAFC Back? : LAFC win third straight, this time on the road appeared first on Last Word On Soccer.