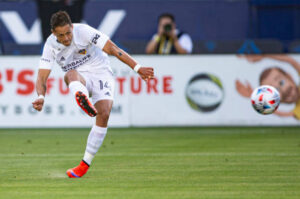 SAN JOSE, Calif. – In the second California Clasico meeting of 2021, San Jose Earthquakes hosted LA Galaxy at PayPal Park. The Gs won the first meeting on an own goal at home. With both teams coming off a midweek game, the LA Galaxy won the match on a brace by Chicharito Hernandez.

LA Galaxy were the better side from the start. Both teams had good passing sequences but San Jose struggled to create shooting opportunities.

Chicharito opened the scoring 11 minutes in. Working quickly from midfield, the visitors got the ball to Samuel Grandsir at the edge of the box. He threaded the cross well to find Chicharito in space who volleyed the ball in from point blank range.

Grandsir and Hernandez both had good looks later in the half.

The most dangerous play for the Quakes say Christian Espinoza get to the touch line, cut inside, and cross into the box, but couldn’t find a teammate.

LA made it 2-0 five minutes into the second half. Against the run of play, Chicharito picked off a back pass at midfield. He found Kévin Cabral in space who dribbled forward, then passed to the striker in stride for a one touch finish at the near post.

Things went from bad to worse for San Jose with 20 minutes to go. Substitute Cameron Dunbar hustled forward and sent the ball into the six yard box. The ball took an unfortunate bounce off goalkeeper JT Marcinkowski then Florian Jungwirth and into the net. The play went down as an own goal by Jungwirth.

Cade Cowell came off the bench to make it 3-1 in the 82nd minute. La Chofis, who missed the best chance up to that point for his team, found Cowell at the top of the box. The Homegrown cut inside and placed the ball perfectly inside the far bottom corner.

San Jose wasn’t able to complete the Goonies comeback, with the match ended 3-1. Andy Rios hit the post in stoppage time on the final shot of the match.

Chicharito in double digits: With his two goals in this game, Chicharito now has 10 on the season and leads the MLS Golden Boot. After two rough games against Seattle and a gut check win against Vancouver midweek, the Galaxy have two wins in a row. Their star striker put in a great performance on and off the ball to get this win.

Rough week for Almeda and company: San Jose lost both games of their double game week by an aggregate score of 8-1. Matias Almeda had that familiar exasperated look on his face on the sideline. The team is trying hard, but quality in both boxes is again lacking.

Cali Clasico won: These teams will meet just one more time this year, meaning the LA Galaxy have already won the Cali Clasico season series with their two wins.