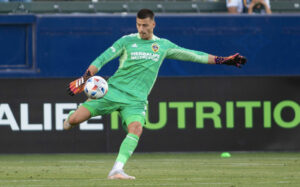 Los Angeles, Calif. — The Cali Clasico is a fairly old rivalry in Major League Soccer. Long before the days of Los Angeles FC, the LA Galaxy and San Jose Earthquakes were the two California teams and they had plenty of battles. Tonight’s battle ended in victory for the Galaxy. But, it wasn’t Chicharito, or Jonathan dos Santos, who provided the goal.

Instead, it was actually from the San Jose Earthquakes — Tanner Beason to be exact.

In the 70th minute, French midfielder Samuel Grandsir dribbled toward the edge of the box, taking on a San Jose defender. Grandsir sent the ball in the box, aiming for Chicharito, but caught the foot of Beason. The Earthquakes defender had a unlucky bounce off his boot, sending the ball past teammate and goalkeeper JT Marcinkowski.

GOAL, @LAGalaxy! Tanner Beason with the own goal for San Jose, giving the Galaxy the lead with about 20 minutes left.#LAvSJ | 1-0 pic.twitter.com/JA2lCVOl1x

Bond might not have earned a goal, but he was certainly the player of the match for the Galaxy, making 12 saves against a solid San Jose attack. His best saves came in the 82nd minute, as the Earthquakes attacked him and pushed hard for an equalizing goal. Bond made sliding saves with his feet as much as he made saved with his hands.

The Galaxy rebounded quite nice after being thrashed by the Portland Timbers last weekend. Los Angeles will look to take their momentum in a high-profile match against the Seattle Sounders on June 19, after the international break. Seattle and the Galaxy met already this year, with the Sounders earning a 3-0 victory over Chicharito and company.

Meanwhile, after the international break, the Earthquakes will look to snap a four-game losing streak against Austin FC on June 19.

The post LA Galaxy vs. San Jose Earthquakes: Cali Clasico decided on an own goal appeared first on Last Word On Soccer.