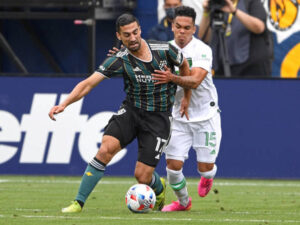 CARSON, Calif. – LA Galaxy hosted Austin FC on Saturday afternoon at Dignity Health Sports Park. Verde were without the suspended Alexander Ring. Javier Chicharito Hernandez and the Galaxy came into this game getting results but looking to put together a convincing 90 minute performance.

Austin did well building out of the back given Ring’s absence. They created a few half chances, but the home side were by far the better team in the first half. Just six minutes in, Chicharito skied a chance from eight yards out.

Chicharito appeared to redeem himself, drawing a penalty in the 25th minute. Chasing down a through ball, Jhohan Romana knocked the striker down from behind trying to get to the ball. Goalkeeper Brad Stuver made the save on the penalty against Chicharito, diving to his left.

The Galaxy deservedly got their goal in the 35th minute. Sebastian Lletget timed his run well as Daniel Steres delivered a weighted pass. Da Boy got around the last defender and beat Stuver with a shot to the far post. The half ended 1-0.

Verde improved going forward in the second half after a triple substitution that saw Rodney Redes and Kekuta Manneh come on. Manneh had several good looks, including in the 65th minute when he cut inside and bent a ball just wide of the top right corner. He then had a shot blocked by Daniel Steres after goalkeeper Jonathan Bond left him a rebound and was out of position.

Chicharito put the game away against the run of play on 77 minutes. The Galaxy got the ball forward through Julian Araujo. The fullback sent a low cross into the box. Chicharito split the center backs and scored on his first touch for a great strikers goal.

Chicharito redemption: It was a back-and-forth 90 minutes for the Galaxy’s center forward. He misses a great chance in the opening minutes, draws a penalty, then misses that penalty. In the end, he redeemed himself with the insurance goal.

No Ring: Austin played out of the back fairly well without their captain. They weren’t as sharp defensively though. They struggled with gap control on several plays including both goals.

Fine margins: Both teams had their chances. It took a great play for the Galaxy to go ahead and then they were able to conveniently play with a lead. Verde had to chase the game and they had some half chances that weren’t finished, but nothing dangerous. That said, both Galaxy goals happened off passes with a small margin for error.