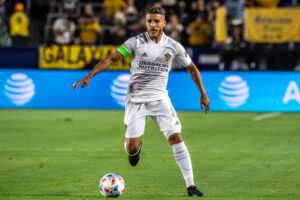 EDITORIAL – The LA Galaxy played two games last week, losing both 2-1. DP striker Chicharito Hernandez hasn’t played since an injury he sustained ahead of the 4th of July game. Since, the Galaxy have been up and down. The consistency and quality hasn’t been there. Greg Vanney and the LA Galaxy are in more than a bit of trouble.

LA Galaxy in Trouble With Recent Form and no Chicharito

Since Chicharito’s injury, the Gs have won four, lost five, and drawn two. That’s 1.27 PPG in 11 games, which would barely be good enough to make the playoffs. They’ve had some impressive results at home, but largely the offense has sputtered.

Dejan Joveljić is still getting settled. Kévin Cabral has scored the occasional goal but so far hasn’t proven he can shoulder the expectations of the No. 9 position. Rayan Raveloson has a spectacular five goals in 11 appearances as a central midfielder. We’ll see whether that’s sustainable.

Jonathan dos Santos and Sebastian Lletget have been less effective since their national team callups for the Gold Cup. The defense and backline, while improved talent wise continues to struggle to keep a clean sheet.

The Galaxy have created chances but are missing their poacher merchant. They’ve also missed Chicharito as an emotional talisman. One could see easily in the first few months of the season how the team adopted his energy and vindication with each win. The entire team played with joy.

That personality and vibe were missing last week. They’ve been missing for sometime. The Galaxy started both matches last week poorly. It took them until they gave up the first goal (maybe longer) to wake up. Even after equalizing, they came up short in the final 30 minutes.

Chicha’s health and fitness have been listed as day-to-day and potentially about to come back for a while. There’s been some unsubstantiated rumors about life off the field. Regardless, it’s a valid question of what version of CH14 will the Galaxy be getting? We’ve seen the player he can be when he’s right in mind, body, and soul. We saw in 2020 what he’s like when he’s missing those things.

If he comes back 100%, he can lift this team halfway through the season. They can still be a factor at the top of the MLS Western Conference. Without him, they’ve been a sluggish, inconsistent, barely playoff team.

Big marquee matchups have historically woken this team out of funks in the past. Maybe Saturday’s El Tráfico road match at LAFC is just what they need to find another level without Hernandez. If that game doesn’t wake them up after losing the Cali Clasico, I can’t see this team being anymore than one-and-done in the playoffs without their star striker.

The post LA Galaxy in Trouble With Recent Form and no Chicharito appeared first on Last Word On Soccer.