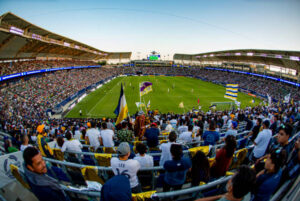 CARSON, Calif. – The LA Galaxy hosted Portland Timbers on Friday night in MLS play. The game took place one day after Geraldo Francisco Dos Santos Javier, known as Zizinho, died. He is the father of current LA Galaxy midfielder Jonathan dos Santos, who was away on international duty, and former Galaxy forward Giovani dos Santos. The Galaxy honored him on Friday night, on and off the field.

The game got off to a hectic start with Portland getting numerous chances. The Galaxy defense and goalkeeper Jonathan Bond were forced into emergency defending to prevent goals.

Despite the poor start, the home side scored first. Off a redirected corner in the 27th minute, Rayan Raveloson scored on a bicycle kick. The central midfielder continued his great run of form at his new club. He continues to be a revolution in midfield, with three goals in three games.

After scoring, Raveloson and the rest of the team ran towards the Galaxy bench, with players holding up two Galaxy jerseys, one with Zizinho on the back, the other their absent captain Jonathan dos Santos, who played the previous night for the Mexican national team.

The Timbers responded immediately. Moments after the kick off, they sprung a counter attack. Yimmi Chara set up Jeremy Ebobise for the goal to make it 1-1.

Five minutes later, the Galaxy retook the lead. Livewire right back Julian Araujo ran down a ball in the corner. He danced around to create space for a cross, finding a wide open Victor Vazquez for the finish.

The home side were a bit lucky to be up 2-1 at half, but improved significantly in the second stanza. Kévin Cabral drew a penalty minutes into the half, going up for a header inside the box. Goalkeeper Steve Clark barreled into him after the ball was gone. Temporary captain Sacha Kljestian took the spot kick well.

The night was capped off in the 56th minute when Araujo did great work on the flank again to find Samuel Grandsir for a smashing header. It was his first MLS goal.

The match ended 4-1 with Portland not doing enough to create chances. With 10 minutes left, Cabral missed a sitter from yards out on the counter attack.

@RavelosonR22 scores an INCREDIBLE goal for our first of the night pic.twitter.com/2jPJhJ8e9Q

Gs back in the win column, despite issues: After a tough road trip, the Galaxy got a much needed win. The offense exploded without Chicharito. They did a lot of good things in the second half especially, but there are still clear weaknesses. The team needs to get healthy, get players back from the Gold Cup, and make incremental improvements.

Portland is slipping: The Timbers haven’t been good this year. The offense sputtered in this game. The aging core look, old. They need Sebastian Blanco 90 minutes fit, a signing or two, and to get on a roll to get in form to make the playoffs and do something when they get there.

Rest in Power Zizinho: His death must be devastating to the Dos Santos family. Credit to Jona for player with Mexico in the semifinals and to the Galaxy for honoring the loss after their first goal.