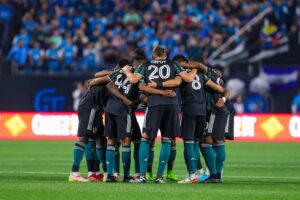 PREVIEW – For the second times in two years, the LA Galaxy face Seattle Sounders in Seattle in the third game of the year. Like last season, the Gs have two one goal wins going into this match. In this fixture last year, the Galaxy lost 3-0. Aspiring to get back to the playoffs, this is a measuring up match for Greg Vanney’s side.

Sounders have yet to win an MLS match this year, having to balance Concacaf Champions League. With a 3-0 win in the first leg against Leon without several key players, they’re in a great position to make the semifinals. That said, they’ve had to rotate the squad and change up the tactics a bit. Los Angeles are unlikely to face a fully operational and rested Sounders this afternoon.

That said, this match last year was a reality check for the Galaxy and Galaxy Twitter. They were never in this game last year. LA has won their first two games this year 1-0 against a soft schedule.

NYCFC played them the opening weekend after playing midweek in CCL. All four CCL teams lost that weekend, and it took a stoppage time winner from Chicharito to beat the defending MLS Cup champs. Then they won last weekend against Charlotte FC, an expansion team expected to compete for the Wooden Spoon.

That said, the Galaxy’s underlying numbers are better. They’ve outshot their opponents and their xG numbers are very favorable. The defense appears improved compared to last year.

It’s possible Brian Schmetzer will run out a reserve team with some of young Homegrowns. If he doesn’t and the Galaxy get a result, it will be a boost to their confidence. Get a point against the first team, and it will be proof of concept.

Douglas Costa has yet to get a goal contribution. This team still seems too dependent against on Chicharito Hernandez for goal production. They’re flawed. But today they can take another step in the right direction towards the playoffs and reestablishing themselves as a force in the MLS Western Conferece.