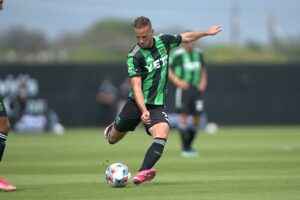 AUSTIN, TX. – Texas-rivals Houston Dynamo FC provided Austin FC with their first-ever MLS opposition when the two met in the opening round of the La Copita tournament. The game ended 3-2 in Dynamo’s favor.

Austin started brightly enough. Their willingness to play the ball out of defense was laudable and not something you commonly see with a brand-new team. Unfortunately, it also proved to be their undoing. All three of Houston’s goals were directly attributable to passing errors, two of which happened in Austin’s half of the field.

Austin’s 4-3-3 formation matched up well with Houston for the majority of the match.

Alex Ring and #1 Super Draft pick Daniel Pereira formed the base of a midfield triangle, providing much-needed defensive cover and additional numbers in and around the box. Ring, in particular, displayed his veteran class. He routinely won key tackles, muscled opponents off the ball, and demonstrated his ability and composure to pick the right pass.

With USMNT defender Matt Besler and the intimidating Jhohan Romaña in the center of defense, Austin were never going to lose the physical battle.

But uncharacteristic jitters from both of them led to several turnovers in the first half causing Andrew Tarbell in goal to be busier than necessary. Both players recovered well with a little help from their fullbacks, Nick Lima and Ben Sweat, who tracked up and down the line tirelessly in the first 45.

Occasionally, the wingers pitched in on the defensive duties, too. Rodney Redes especially showed his engine, galloping back into his own half to make a last-ditch block or tackle on more than one occasion. As one would expect in preseason, the team clearly still has work to do balancing their defensive shape and tightening up their possession game.

The Verde can certainly take heart in the flashes of mercurial at the other end of the field, though. Argentinian Tomás Pochetino delivered a truly world-class freekick to open the scoring after the bustling Redes was bundled to the ground just outside the box. Austin’s No. 10 Cecilio Domínguez also showed moments of inspiration. His footwork, balance, and creativity carved out several half-chances for himself and team-mates.

Redes was perhaps the pick of the bunch in attack. As he’s shown against USL opposition already this pre-season, his willingness to run at people at pace causes panic in opposition defenses.

He also has an eye for goal, being in the right place at the right time and the first to react to Alex Ring’s palmed-out shot to tie the game up on the 68th minute. His diving header represented a moment of unexpected improvisation and, in addition to his blistering pace, that might be the thing that marks Redes out as a truly exciting prospect this season. Unexpected improvisation.

Danny Hoesen cut a lone figure at center forward, but to be fair to Hoesen the team wasn’t really playing to his strengths. Hoesen tended to play between the center backs, requiring either balls to feet or crosses to get on the end of. When Jon Gallagher replaced him in the second half, the Irishman’s running game and eagerness to pull wide caused Houston problems. Gallagher and fellow second-half sub Kekuta Manneh combined several times, with both having the opportunity to score a game-tying third goal. Alas, it was not to be.

Coach Josh Wolff reflected after the match, “we started relatively well, but as the game progressed, we struggled with the high-press. Houston played a 3-4-3 which meant we had seven players in our half pressing the ball and we struggled to play through the lines.”

When asked if he thought the occasional sloppiness with the ball was tiredness or individual errors, “as the first half went on, we looked a little leggy, and then the decision-making becomes poor, and then the technique starts breaking down.”

Wolff went on, “I want our guys to face that and find solutions. We have ways to address those situations, but it didn’t happen today. But that’s preseason. We know we have a lot of work to do, as you would expect just a few weeks in. But we certainly want to make progress sooner than later.”

In a game where Austin largely went toe to toe with seasoned MLS competition, gave minutes to the majority of the outfield players on the roster, and arguably scored the two prettiest goals of the match, there’s plenty to be positive about. Austin FC undoubtedly needs to take better care of the ball, though. Houston didn’t make the most of their sloppiness in the first half but punished them ruthlessly in the second. Wolff will want to address that, as he said, sooner rather than later. The team will need to. Wednesday’s opponent FC Dallas waits in the wings for their second game of La Copita.