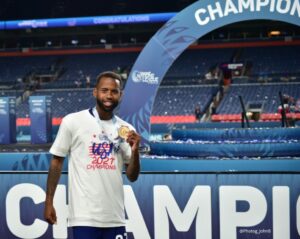 EDITORIAL – Kellyn Acosta should play in World Cup Qualifiers for the United States Men’s National Team. If the Nations League did not prove it, the 2021 Gold Cup will. Three years after being out of the USMNT picture, he’s back in the hunt. He’s playing well for club and country. It’s all there for him over the next few months.

Kellyn Acosta “in the mix” for WCQ with Gold Cup Opportunity

2018 feels like a long time ago thanks to COVID-19. That summer, Acosta was traded by his boyhood club FC Dallas to the Colorado Rapids. Disgruntled by lack of playing time, he was looking for an opportunity. He needed to go somewhere where he was going to start, as a midfielder, and be able to impact a team that needed help.

He might have been the American International most negatively affected by the USMNT failing to qualify for the World Cup the previous fall. Acosta played in 13 international games in 2017, including five of six games in the Gold Cup, which the U.S. won. He started the WCQ at the Azteca, a hard fought 1-1 draw. He was even an All-Star.

Half way through 2018, had all come crashing down. He’d been relegated to the Dallas bench, starting just eight of the first 20 league games before the trade. No World Cup. No great season at club level to earn a move to Europe after that World Cup. He was traded to a team at the bottom of the Western Conference desperate for midfield help. He was going to start at least.

Club career back on track:

Fast forward to November 4, 2020. Acosta’s starting regularly for the Rapids, now coached by Robin Fraser. Having joined the club and selected the No. 10 shirt, he’s now a slightly defensive No. 8 in a three man midfield. He’s not the put the team on his back midfielder he was hyped up to be upon his arrival.

Fraser’s helped mold him into a player with defined responsibilities. It’s working out for all parties. He presses. He’s tidy on the ball under pressure. He rarely makes a mistake defensively. Next to Jack Price, he’s in the engine room making the transition between defense and possession look easy.

Further up field, he’s next to Cole Bassett, knocking the ball around to open up the attack. No Burgundy Boy’s benefited more under Fraser.

“He helped me get back on my feet. Tactically being more sound, helping me build my confidence, and fix the little details,” Acosta told Last Word.

On November 4, he does this to send the Rapids to their first MLS Cup Playoffs in four years:

Kellyn Acosta just might have sent the Bizarro Colorado Rapids to the 2020 MLS Cup Playoffs pic.twitter.com/deqwPPZA1s

Acosta has just three goals and two assists in his last 2000 minutes played. When he has a goal contribution, it’s usually spectacular in nature and timely. When the Rapids do score and he’s not on the scoresheet, he’s usually made an impact 20-60 seconds prior. A tackle, a nice move with the ball to keep possession, a pass to open things up.

“Kellyn has a number of different attributes that make him valuable in different positions. As soon as he embraced that, he just got on with it. Because he’s such a good athlete, he’s thrived in those moments,” Fraser told Last Word.

For the last two years, all he’d done was try to win the day. He realized the type of player he is and isn’t and embraced becoming the best version of his true self.

835 days into his time in Colorado, the stone that weighed him down from potential unfulfilled in 2018 had been proverbially split in two. That December, he made his first national team appearance in over two years in a friendly against El Salvador.

The Rapids started 2021 well as did Acosta. They won four of five games in May. Acosta was again an impactful midfield cog in Fraser’s 4-3-3 machine. He was doing a bit of everything, his role gradually starting to mirror what USMNT Head Coach Gregg Berhalter would want him to do as a No. 8/No. 6.

Acosta made the roster for the tournament, starting and playing all 120 minutes in the instant classic of a final which the United States won 3-2 over Mexico in extra time.

The final was almost poetically a microcosm of his last three years of club soccer. The first 25 minutes were uphill adversity, having to solve problems and put out fires in real time. He played alongside childhood friend and Dallas Academy buddy Weston McKennie, trying to anchor the team as the played out of the back. He was asked to do a lot of defensive dirty work that wasn’t pretty, but that he’d become accustomed and good at with Colorado.

“It was just a matter of keep battling. I’m a team player first. Whatever I can do to help the team get the result, whether it’s midfield or outside back, I want to be on the field,” said Acosta.

In the final minutes, he was moved to left back to see out the game, having played there as rookie with Dallas and with Colorado when Sam Vines was unavailable.

“Kellyn to play two positions. We changed the formation and to go into that role, is so tough. Give him so much credit. As an MLS guy seeing him do what he did on the big stage, so happy for him,” is how Sebastian Lletget described Acosta’s tactical performance in the final.

Traded to #Rapids96. Essentially out of the #USMNT pool. Now he here. #KellynAcostaHive

“It was huge for him, being in the mix with a bunch of players who play in Europe. He definitely proved a point. He can play in that role consistently with the national team,” said Rapids teammate William Yarbrough.

Acosta was selfless and team-focused in the final. He didn’t have a great game, but he freed McKennie up to bulldog the midfield at times. His tactical flexibility allowed for a positional sub to see out the game. He started that international window behind Jackson Yueill on the depth chart and appeared to have jumped him by the end.

Based on this roster, he and Lletget are the tribal elders of the midfield. Yuiell has been called up as has Sporting KC’s Gianluca Busio. He’s had a good season and is closer to a pure No. 6. Busio’s eyeing a move to Europe this summer, something Acosta wants but doesn’t appear to be immanent.

In the last two Rapids games, Price has been unavailable to start. Fraser has played Acosta as a holding midfielder, in a very similar way to how Berhalter would want his No. 6 to play. It seemed intentional and Acosta had two great performances.

“He’s now in the mix. He’s in the mix with all the European players there. He’s confident in who he is. The sky’s the limit for him at this point,” said Fraser.

There’s competition and opportunity. Whether it’s as a holding or box-to-box midfielder, Acosta should be a starter in this tournament. If he continues his upward trajectory, he’ll have earned the right to at least be McKennie’s understudy come World Cup qualification.

“I want to win the Gold Cup. For Qualifiers, I want to be involved in every game, I want to play.”

It’s all there for him. Just like after Fraser’s decision to redefine his role in the midfield, there’s only one thing left to do: Get on with it.

The post Kellyn Acosta “in the mix” for USMNT WQC with Gold Cup Opportunity appeared first on Last Word On Soccer.