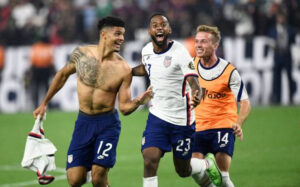 EDITORIAL – Sunday night, the Gold Cup Final at Allegiant Stadium. The United States Men’s National Team are in an extra time battle of wills with Mexico. The clock reads 116:40. Midfielder Kellyn Acosta stands over the ball just inside the final third. He serves the ball into the box for the set piece. It’s perfectly placed for Miles Robinson to head in the winner. That moment was the exclamation point to the following sentence: With his Gold Cup performance, Kellyn Acosta has arrived for the USMNT!

Kellyn Acosta has Arrived for Club and Country

As I wrote right before the Gold Cup, Acosta has been on an upward trajectory since being traded to the Colorado Rapids in 2018. It all came together in the most cathartic way when he scored the goal to send the Rapids to the playoffs for the first time since 2020 in a game at Portland Timbers.

He’s settled in as a central midfielder who can do a little bit of everything well. His role with the Rapids increasingly mimicked what his potential role with the national team would be: Pressing, linkup play, working in tight spaces, disrupt the opponent with timely tackles. Occasionally ping a good 30 yard pass to open up the counter attack. Provide service on set pieces. At times, play at outside back.

With the Rapids in particular, he’s not responsible for the final action in the attack. He’s similar N’Golo Kanté and Andrés Iniesta: He’s a star even though it doesn’t show up in conventional stats. His impact is in the eye test, every time he’s on the ball or is defensively disruptive.

Acosta kicked it up a notch throughout the Gold Cup. In the Concacaf Nations League, he was mostly supportive to Weston McKennie. He was a role player. At the Gold Cup, he was the War Daddy of the midfield in a 4-3-3. He took charge of games when the USMNT needed to clean things up defensively. He increasingly took set piece responsibility as the tournament went on, something he has not done with the Rapids with Jack Price taking corners. The two times he delayed the taking of a penalty (both of which were unsuccessful) highlight his improved and measured Concacaf gamesmanship.

It all came together in the final on Sunday. He broke up and antagonized El Tri’s buildup play like I’ve never seen. He made going up the middle of the field miserable and distributed the ball well to make it easier for the U.S. to break out in the attack. (Not that the attack was affective when that happened). He put in a utility knife that 2013 Michael Bradley would have been proud of. At worst, he’s the first sub off the bench for McKennie or Tyler Adams. In certain situations, he’s the best choice midfielder to play with those two in a 4-3-3.

In 2020, it all came together for him at the club level. In January, he showed he does not shrink at the international level. In the Nations League Final, he showed he can survive at the top levels of Concacaf. Less than two months later, he’s grown and progressed even further. He showed on Sunday he will thrive in the toughest of situations in World Cup Qualification.

Acosta and others announced their presence during the Nations League. On Sunday, he planted his feet firmly in the lineup for the El Salvador on September 2. With his current trajectory, he’s already got one foot on Qatari soil.

The post Kellyn Acosta has Arrived for the United States Men’s National Team appeared first on Last Word On Soccer.