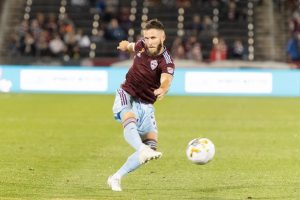 COMMERCE CITY, Colo. – Midweek MLS after dark. It’s something else. On Wednesday night, Colorado Rapids hosted San Jose Earthquakes. The Quakes were playing for pride, sitting at the bottom of the conference table. Colorado were looking to keep the playoff push going with another home win.

The visitors had the better start. They pressed Colorado when they played out of the back, leading to turnovers and counter attacks. The front three all hand chances. The Rapids however got on the board first 21 minutes in. Jonathan Lewis cut inside to the side of the box and crossed. It was blocked and fell to Diego Rubio who shot first time, picking out the bottom left corner.

Jamiro Monteiro had a great chance set up by Cade Cowell but it was blocked out for a corner. Cowell was a catalyst on the left flank, pressing, dribbling, and cutting inside to create. On that corner, Cristian Espinoza found Nathan at the near post to sneak it through traffic. The half ended 1-1.

The second half was tighter. Colorado cleaned up and simplified their play out of the back. Felipe Gutiérrez had a chance in the 65th set up by Lewis, but he put it wide as he slid to the ground. Cowell nearly capped off a great performance with a winner in the 69th, but his shot hit the bar. Espinoza got space at the end line and passed to him just inside the box.

The match seemed headed for a draw unless there was a moment of individual brilliance. Keegan Rosenberry brought that in the 77th. Rubio and Max moved the ball on the ground across the field to the right back. Rosenberry dribbled forward. With no pressure on the ball, he blasted the ball on a rope to the top right corner.

“We’ve played better. That’s evident. We didn’t change anything at halftime. We just had to play better. I don’t think we did play better. Tonight was about the result. We take it and move on,” defender Danny Wilson said post game.

Keegan Rosenberry with the strike from distance to give @ColoradoRapids the go-ahead goal! pic.twitter.com/mgO6YEvJPf

Quakes building for next year: San Jose’s looked better since the Luchi Gonzalez announcement. There’s a clear style of play. Cowell looks great. They still need to rebuild, but the cupboards are not bare. This result did officially eliminate them from playoff contention. They were the better team.

Rosenberry keeps hopes alive: Every year, Rosenberry has one or two of these goals from distance in him. It came at the perfect time. One could argue Colorado was outplayed. They got the result and are now in 9th with three games to go.

“With regard to the striker, I keep telling him in training he needs to look for the strike. He’s such an unselfish guy he doesn’t want to do it. It’s such an impressive goal but it doesn’t surprise me because he does it in training,” Rapids manager Robin Fraser told Last Word.